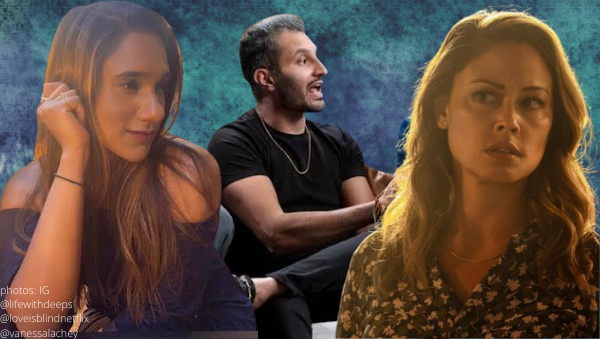 ***No, that cringe AF moment IN FRONT OF VANESSA’S HUSBAND, ‘Obviously‘ Nick Lachey, wasn’t the first time Shake made a pass at the former MTV veejay.***

In an appearance on the “We Have the Receipts” podcast, Deeps dished to LiB season 1 breakout star, Lauren Speed, about the event in Mexico when all of the engaged LiB2 couples saw each other in person for the first time.

Shake’s blatant disrespect toward Deep wasn’t his only shady behavior during the relationship experiment.

“He made a lot of the other girls cry.”

“They don’t show that, but I actually had to talk to him about that.”

“It was a rocky step in our progression in the pods. And that’s when he had that self-reflection moment of being like ‘I don’t know why I’m asking these questions,’ and so I saw some depth in him. I was like, ‘Oh there’s some good in there, maybe I just need to extract it out.'”

While Shake is not hooking up with Nick Lachey’s wife, Deep is living her best life while “figuring it out” with fellow season 2 pod dweller, Kyle Abrams.

“Not a lot of people know that we had a really strong connection in the pods,” which LiB viewers (unfortunately) didn’t get to see.

“I was really struggling to pick between Shake and Kyle,” Deep divulged to Elite Daily.

In a world of Shakes, be a Kyle.

Who are your favorite and least favorite singles/couples from LiB2? Drop names in the comments!