"Those boots are made for walkin’ right into prison." 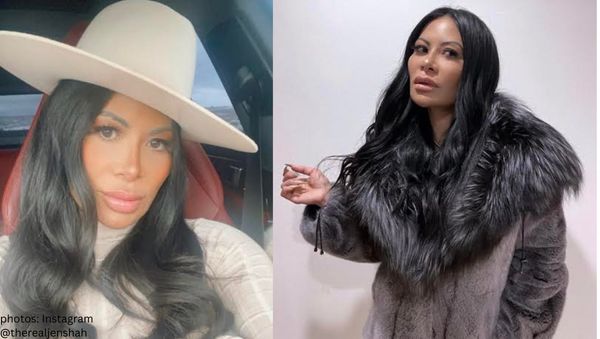 The self-proclaimed Queen Bee and MVP of Real Housewives of Salt Lake City, Jen Shah, is en route to meet her fate … literally.

The controversial RHOSLC star was spotted at the Salt Lake City airport on her way to New York, where Jen will receive her prison sentencing on 1/6/2023. (The countdown is on!)

Fashion choices were made as Jen chose to stack gold bracelets and don oversized rings, all while adorning a black fur coat as she walked through the SLC airport … while Coach Shah, appeared to be social distancing from his wife.

Clearly, I don’t need to point out Jen’s knee-high, high-heeled leopard print boots; however, I do have to ask … are those the same boots she wore to her initial court hearing?

Thanks to podcaster @nofilterwithzack for the literal *boots on the ground* content.

A post shared by #NoFilter with Zack Peter (@nofilterwithzack)

The majority of commenters hope to see justice for the lives affected by Jen’s telemarketing scheme that targeted senior citizens and sick people, though some showed empathy for the ‘Shah-mazing‘ reality star.

Do you think Jen’s flaunting of her fake wealth at this stage in the criminal proceedings will negatively affect her prison sentence? Sound off below.