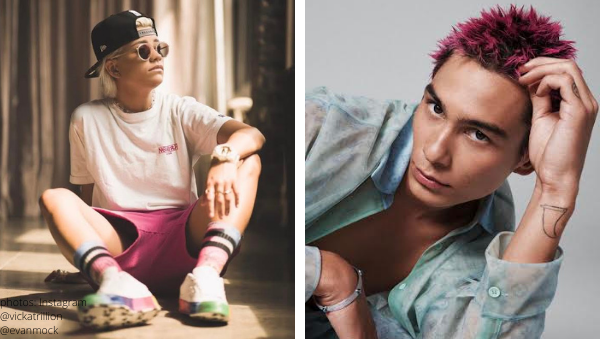 If you are anything like me, you embrace off-screen drama as much as what’s actually happening on camera.

Sure, I’m shaken after watching the three recently-released episodes of the Gossip Girl reboot, but you can color me curious about the adorable pink-haired actor who plays Aki Menzies…and his negative reputation with model/influencer, Victoria Brito.

S’More Date founder Adam Cohen Aslatei (ACA) asked Victoria to name a model she worked with that she wished she hadn’t.

The *alleged* girlfriend of Real Housewives of Orange County alumni, Braunwyn Windham-Burke, called out a model/skateboarder who is brand new to the acting scene.

“Oh my Jesus. He’s well known right now. He’s on a little show called Gossip Girl (the reboot on HBO Max). I don’t like him very much. The one with the pink hair. Evan whatever-the-hell-his-name-is. He can go that way…”

In her very own Mariah VS JLo moment, Victoria didn’t know the up-and-coming actor’s name.

“I genuinely (don’t know his name)- Evan…he’s the main guy on Gossip Girl with the shaved pink hair. Like, Evan something. I really don’t remember what his last name is…”

Who is Evan Mock?

In addition to being the guy from GG with “the shaved pink hair” that Victoria Brito isn’t fond of, Evan Mock had a variety of skills to bring to Hollywood.

Having grown up a skater and surfer, Evan moved to California to pursue a career as a skateboarder at age 18. Opportunities came flooding Evan’s way after singer Frank Ocean posted a video of him skating.

That exposure boost gave Evan the notoriety to evolve into a high-fashion model, which led to his first acting role. According to the Gossip Girl reboot’s creator Joshua Safran, the part of Aki was created for Evan to portray.

Victoria didn’t elaborate on what made her experience with Evan so negative. But you can bet your bottom dollar I am working to dig up the dirt!

What are your thoughts on the GG reboot? Sound off in the comments!