With the end of Taylor's 'Midnight Mayhem With Me' TikTok series comes a full 13-song track list. 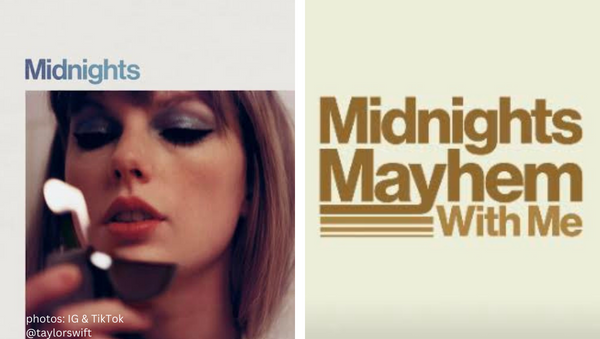 Singer/songwriter/actress/director Dr. Taylor Swift gifted her fans and followers with a TikTok series, Midnights Mayhem With Me, to announce the tracklist for her tenth studio album, Midnights.

In each episode, as cheesy hold-music plays, Taylor employed a “technologically advanced device” (aka a bingo cage) to allow “fate to decide exactly what track titles” she would announce “and in what order.”

The cage housed 13 balls labeled with the numbers 1-13, indicating the number of tracks on Midnights … (Of course, Midnights has 13 tracks!)

Taylor speaks into what appears to be a red *rotary* phone (look it up) which was programmed to distort the ‘Cardigan‘ singer’s voice.

The cover art from the MMWM series expands on the established 70’s aesthetic pairing an egg-shelled background with russet/kobicha colored lettering and lines.

Wearing a different outfit and hairstyle for each episode, Taylor ensured her followers 13 ‘midnights’ to remember with her first-ever track announcement. (Maybe Tay can call her next album *8:30* for those of us who aren’t built for midnight releases … just a suggestion.)

Video one of the series began with Taylor admitting her “habit of dropping cryptic clues and Easter eggs” when promoting new music.

“I am not here to deny that, but I am here to defy that,” the eleven-time Grammy winner promised as she welcomed her followers to her TikTok series, ‘Midnights Mayhem With Me.’

Without further ado, the Midnights tracklist:

Taylor took to her Instagram page to give some insight into two songs from Midnights – track 1: Lavendar Haze and track 3: Anti-Hero.

Swifties, the countdown til the October 21, 2022 album release is on!

Which of the 13 tracks are you most excited to hear? Drop track names in the comments.