"The timing is really convenient." 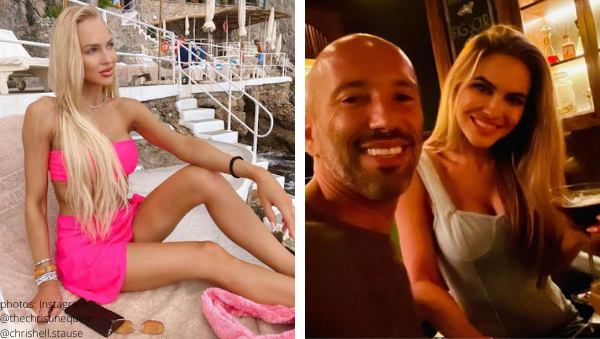 Not ‘sold’ on Chrishell Stause and Jason Oppenheim‘s relationship?

The new couple’s Selling Sunset co-star/agent at The Oppenheim Group tattled to TMZ that sparks flew between the lovebirds as soon as the actress walked into her now-boyfriend’s office.

“I think the second she walked into the office it was definitely love at first sight between them. I think there were sparks flying.”

“We all saw it…the way he looked at her when she walked into the office, we were like ‘Ok, ok.'”

“The timings really convenient. You, know just in time for [filming] season 5” as well as the release of season 4.

Christine clarified that she does not think Chrishell and Jason’s relationship is just a storyline, “the timing is just really convenient.”

“I personally think there is a lot of favoritism involved. I haven’t seen it personally with Chrishell, but I have seen it with Mary [Fitzgerald] so I know it does happen.

You may remember issues the ladies in the Oppenheim office had with their boss during season 2 after giving Mary precious listings over them.
Sure. Jason may be dating another one of his agents; however, Christine hasn’t seen Chrishell get any special treatment since she began dating the boss.

Do you see Chrishell and Jason’s relationship lasting? Drop your opinion off in the comments!