Leah asked, "If we want to hold Cardi to certain standards why aren’t we asking the same of male rappers?" 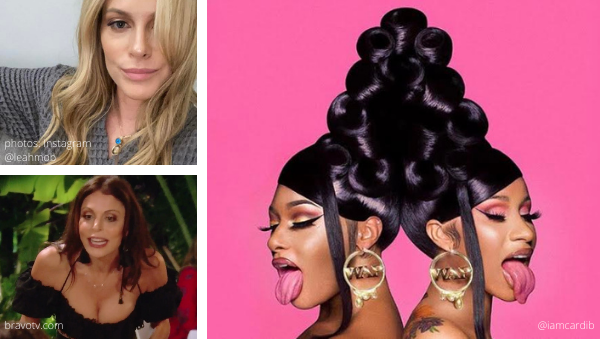 She may float, like a butterfly- but Leah McSweeney stings like a bitch, if you mess with a hip hop icon…

The Real Housewives of New York star clapped back at RHONY alum, Bethenny Frankel, over remarks she made about Cardi B and Megan Thee Stallion‘s song, ‘WAP.’

Today is @lilkimthequeenbee appreciation day. Thank you for being my feminist icon. #QueenBee #QueenBitchSupremeBitch

Like West Side Story‘s Jets and Sharks, Leah clapped back with a dance off (aka the WAP challenge) to her Instagram page after B stated, “Women should do better” about the song of the summer.

Leah wrote, “If we want to hold Cardi to certain standards why aren’t we asking the same of male rappers? If they can talk about WAPs why can’t she? WAP WAP WAP FOR LIFE! #ThankYouLilKim #ThankYouHipHop.”

Though Leah didn’t ‘Mention It All‘ by naming/tagging Bethenny in her post, her post came the morning after B’s podcast dropped stating her opinion.

Happy belated bday @iamcardib If we want to hold Cardi to certain standards why aren’t we asking the same of male rappers? If they can talk about WAPs why can’t she? WAP WAP WAP FOR LIFE! #ThankYouLilKim #ThankYouHipHop

Can we normalize dance offs as a way to clap back?!?! It’s the plot twist 2020 desperately needs….

What did Bethenny say?

In case you missed it, the humanitarian expressed her unsolicited opinion about the hit song on the Just B with Bethenny Frankel podcast.

Listen to the newest episode of @justbwithbethenny at the link in my bio or on your favorite podcast app! This week I rant about #WAP and talk to @danawhite about how he fought his way to the TOP. #JUSTBwithBETHENNY

“There’s some whores in this house:”

My personal favorite part of WAP is the ‘there’s some whores in this house’ loop in the background- it reminds me of the –wooo wooo from the Rolling Stones‘ Sympathy For The Devil. Bethenny’s opinion is the opposite of mine.

The Skinny Girl CEO found the lyrics of the song’s loop problematic for women, nor was she impressed with Cardi’s line about men spitting her mouth.

Bethenny is a cool mom…

Bethenny explained to her listeners, “Sex sells, it always has. We were talking about sex in songs.”

“I think Samantha on Sex and The City started this thing. Where it was liberation and sexuality. Which I get. I get it, the men have been the players and the men talk about their conquest and sex. why can’t women.”

Bryn’s mom analyzed the legitimacy of the song’s lyrics when she quoted the line: “park your mack truck in my tiny garage.”

Want to stay up-to-date on all things Bravo?

Keep your celebrity and reality tv bucket full by subscribing to the On This Day Entertainment podcast. Here is the most recent episode!

Are you on Team Leah or Team Bethenny when it comes to the great WAP debate? Drop your opinion off in the comments!