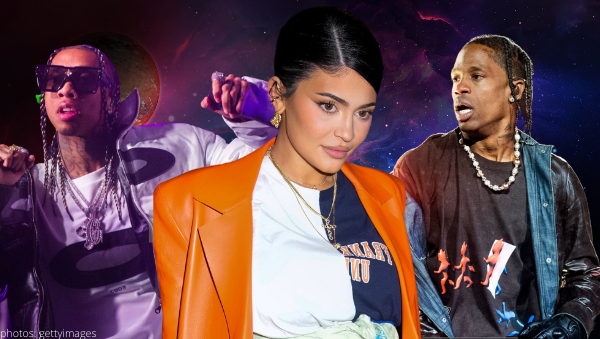 Though there was no sighting of the controversial rapper’s baby mama, Kylie Jenner, an old (-ahem-) friend of the mother of two was in attendance…Tyga.

The ‘Taste‘ rapper who dated Kylie between 2014 and 2017, was spotted in the VIP section at Travis’ show during the Academy Awards soiree.

According to reports from Us Weekly, Tyga “stood up to listen to Travis and then would sit back down.”

“[Tyga] could [have] left and gone to another room but he chose to stay in the main room to watch his performance.”

Kylie’s baby daddy headlined the Astroworld Festival in which ten lives were lost, in addition to the hundreds injured during the chaos.

CNN reported that Astroworld 2021 attendee, Sarai Sierra, “saw about 20 people who could not breathe, including one person who suffered a seizure before her eyes.”
“It felt like we were drowning in a pool filled of just people,” recalled the concert goer.

According to Daily Mail, Travis Scott “has a history of inciting mayhem at his notoriously rowdy concerts,” and has “previously pled guilty twice to disorderly and reckless conduct charges.”

Do you think the Keeping Up With The Kardashians alumni will continue to stand by her man? Sound off in the comments.