The former real housewife explains why she unfollowed all of her co-stars (and Andy) on social media. 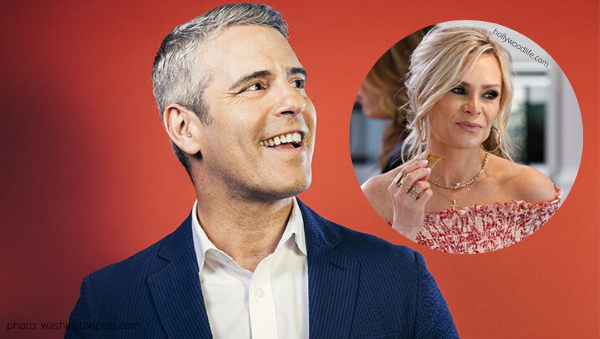 Andy Cohen and Tamra Judge (formerly of the Real Housewives of Orange County) discuss her departure from Bravo‘s hit show on Instagram Live. Lucky for the Cut Fitness owner, her former Bravo boss allowed her to get closure from her recent demotion, which led to her departure from RHOC. She even spills the tea on why she unfollowed all of her former co-stars (even Andy) on social media.

The Watch What Happens Live! host was backstage at the clubhouse and decided to kill some time on Instagram Live chatting with fans and even answering questions. During his live/interactive broadcast, Andy noticed the most recently declared ‘former housewife’s’ name popped up on his screen.

In an epic twist of events, fans witnessed Bravo’s head honcho and the former housewife’s first face to face (you know what I mean) since she announced her RHOC exit.

Tamra joked, “I’m just sitting at home studying my real estate because now I need a new career.” Andy chuckled as he low-key trolled Tamra, “You are so funny. You’re the queen of CBD. What do you mean you need a new career?” (Like he doesn’t know…)

The mother of four playfully responded that she’s ‘bored’ now that she’s no longer a reality star. Though she teased about returning to real estate, she clarified, “I’m probably not going back to real estate but I have to renew my license every four years and I always do it because I’m always looking for a backup plan.”

“You’re smart,” Andy encouraged. “You always had other businesses going the whole time.”

Tamra was on top of her game when she quipped, “I do! And thank God for Vena CBD or I would be sitting in front of Costco with a sign saying, ‘Andy Cohen fired me. I will work. No, I won’t work. Just give me money.’”

Tamra responds to her mass unfollowing:

Andy threw his cards on the table (which is why he’s Bravo’s daddy) and asked, “Why did you unfollow everyone, including me?”

The fitness guru explained she was on a camping trip and, “I got a text message from production saying, ‘Call me.’ And I was a little bit, like, in shock. And because I knew it was going to be a ah!t storm, I didn’t want to read about it. I didn’t want to see it. I didn’t want to be hurt more than I already was. So I unfollowed everybody. So it was my instinct. Out of sight, out of mind.”

Judge laughed that she only followed Cohen back for photos of his son, Benjamin, to appear on her feed.

How are the other long-running Real Housewives handling Tamra, and Vicki’s, news?

All the OGs are shaking in their boots thinking they’re going to get fired too.” Tamra even joked that Ramona Singer from Real Housewives of New York has already called her twice!

In case you’d like to hear all of this for yourself and the details of how Tamra met Eddie Judge, here ya go!

What’s next for Tamra?

In addition to Tamra’s hopes for people to simply give her money, Andy has a plan for her. He told Tamra how he plans on reaching out to her for WWHL! appearances, future Bravo Cons, etc.

Would you like see Tamra make guest appearances around the world of Bravo, or would rather be completely rid of her? Sound off in the comments!