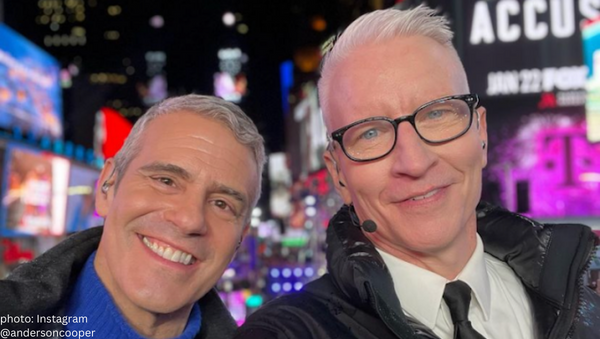 Real-life BFFs Anderson Cooper and Andy Cohen successfully hosted CNN‘s New Year’s Eve 2023 while sober.
Bravo‘s daddy remained the “party ringleader for everyone watching” alongside his pal as they took celebratory shots – of a non-alcoholic mystery beverage – at the top of each hour.
**Never forget AC x 2 were banned from drinking after 2022’s NYE countdown show shenanigans in which Andy dragged ex-NYC Mayor, Bill de Blasio, for trash.**

As each hour arrived, Andy and Anderson closed their eyes while shooting the mystery liquid as the audience toasted with them. The hosts wore bejeweled Ramona Singer-inspired glasses while the audience learned the non-alcoholic contents of the shot glasses.

Both hosts, who have children thanks to surrogates, chased their mystery shots with juice boxes.

The Watch What Happens Live host stated for the record, “I prefer tequila.”

Did you enjoy ringing in the new year with a sober Anderson and Andy or did you miss the mess? Drop your opinion off in the comments.