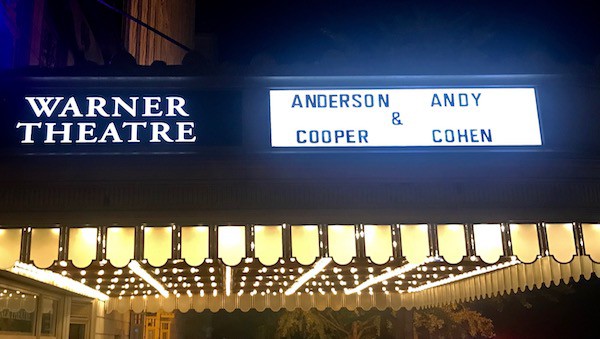 What do a news anchor and a reality television host have in common? As it turns out, more than you might think. However, at first glance it doesn’t appear that CNN’s Anderson Cooper and Bravo’s Andy Cohen go together as well as Tamra Judge and tequila, but Anderson’s modesty and Andy’s lighthearted love of attention make for great entertainment.

Last Saturday I ventured to DC to see this live show, AC^2, an intimate evening with the two as their site advertises. Other than the name, there’s really not much information on the site at all. Is it a scripted show? Is it a comedy show? Will they just sit on stage interviewing each other? I had no idea, but I love surprises, and there was no way I was going to miss seeing the hottest tv daddies in person.

The sold out show got a bit of a late start due to the extreme long lines at the theater bars which is to be expected from fans of WWHL drinking games. What’s surprising and special about this show is that very little has been leaked about the actual content of it online. I don’t want to be the as*hole who gives too much away, and I certainly don’t want to unleash an angry army of Bravo fans on myself, but the show was too good not to write about.

Basically, AC^2 was Andy and Anderson hyping each other then telling their most embarrassing stories. While they prepared topics, it didn’t seem rehearsed at all; they clearly had a lot of unrehearsed banter and were’t going off of a script. The audience, myself included, loved the way the two naturally interacted.

AC^2 covered everything from suicide to Jesus Jugs in the most authentic way. While the majority of the show was the two men talking, they showed pictures and clips of one another as well. There were real housewives montages, pictures of Andy crawling on stage at a Britney Spears concert and Anderson at a Madonna show, and excerpts from Anderson’s emotional interview with his mom, Gloria Vanderbilt. The show had a little something for everyone, even the straight husbands who were dragged along to the show.

My own personal litmus test for whether a show is good or not is if it makes me both laugh and cry. This show accomplished both. I pride myself on my rbf, but my face actually hurt from laughing at the end of the night. I mean, my overpriced wine in a plastic cup helped ease the pain (major Kim Zolciak vibes), but still. Since I’m a very logical person, I decided to wear makeup that I exclusively reserve for birthdays and Paris to the show to impress the gay men who were yards away from me on stage. Big mistake. I cried most of it off from hearing about Anderson’s family losses and then cried the rest off from laughing at his dark humor about it.

Both ACs told tales of their past embarrassments and mistakes. There’s nothing like listening to two of the most admired men in their respective fields talk about an awkward email exchange with Gayle King and thinking a statue of Teddy Rosevelt was their grandfather to help you accept your own mistakes and realize that one day you too can possibly make money off of your most cringeworthy life moments! 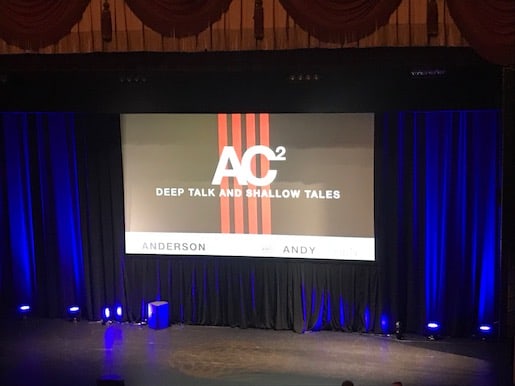 In the end, Andy and Anderson showed us that we’re all just people who want to be spanked on stage by our favorite popstars.

Want to see the show live for yourself? Find tickets here!