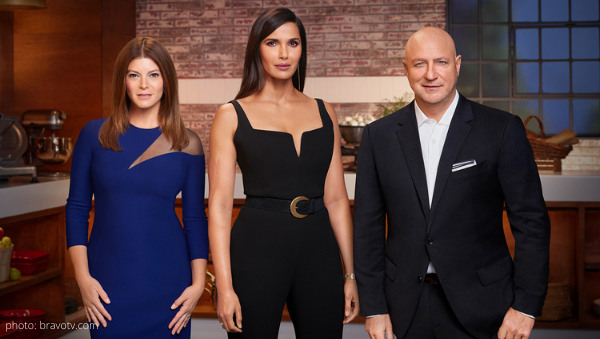 Bravo’s iconic cooking competition show, Top Chef, which made a few production changes according to covid 19 protocal and is prepping for its 18th season in Portland, Oregon.

Back by popular demand are Padma Lakshmi, Tom Colicchio, and Gail Simmons.

Padma took to her Instagram page to share her excitement for the upcoming season. “We did it! Through COVID, fires and everything else. And it’s a great season! Thank you to my @bravotopchef crew for working so hard to keep us all safe. We got through it without anyone getting sick. We love you Portland and were so happy to shoot there in support of the city and the BLM protesters for civil rights 💜.”

One of my personal favs, Chef Gregory, posted the following message to the ‘gram.

“Hey look it’s me in the Top Chef kitchen in street clothes. Can only mean one thing. Pack your knives Portland! It’s go time. 🙌🏾 Catch me as an alumni judge on @BravoTopChef Season 18, premiering April 1st on @BravoTV! Had SO much fun this season and I know you will too! Congrats to local chefs @chefsara_h and @chefgabrielpascuzzi for making it on this season! But hey, no spoilers and no favorites. 🤐😉.”

Food & Wine was also told to expect appearances by some of the greats, including José Andrés, Massimo Bottura, Gabriel Rucker, and Alice Waters.

(Check out foodandwine.com for photos and detailed descriptions!)

This year’s competitors include-

Chris Viaud– Chef and Owner of Greenleaf and Culture, both located in Milford, New Hampshire.

Here’s a sneak peak of the season:

Have you had the chance to eat at any of this year’s chef-testants’ restaurants? Drop your reviews off in the comments!