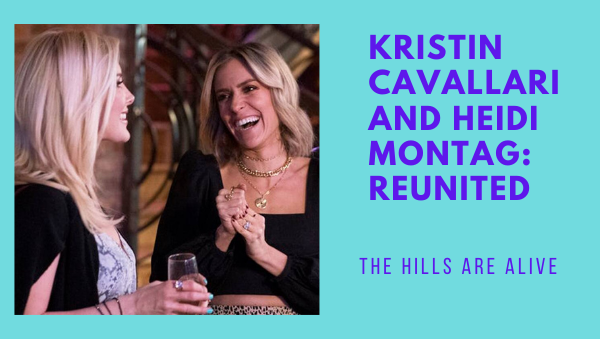 Feel the rain on your skin…

Rumors that the second season of MTV‘s hit reality show, The Hills: New Beginnings, has begun filming after the franchise’s OG, Kristin Cavallari, had a hang sesh with her former co-star/friend, Heidi Montag.

Not dunzo after all:

The Laguna Beach, The Hills, and Very Cavallari alum teased her return to reality tv on her Instagram page with the caption, “Cameras up 🎥.”

The mother of two shared more on the ‘gram- this time in her ‘stories’, writing, “Back waiting around in a production van.” The blonde bombshell tagged Malibu, California as her location.

Kristin has been quite the jetsetter the last few months. In case you missed her night full of cocktails and karaoke with Craig Conover and Austen Kroll from Bravo‘s Southern Charm, here ya go!

Did the old friends post their first attempt at the viral dance trend? Was this their best cut? I have so many questions….

Lauren Conrad‘s former BFF posted that she was getting her makeup done for “filming.”

In March of 2020, KCav confirmed she was planning on appearing in a cameo on season two of The Hills: New Beginnings. “I don’t know when I will start filming or what’s happening yet.”

Who is coming back?

Mischa Barton will not be back for a second season. Hopefully she is out seeking justice for Marissa Cooper (please excuse this antiquated pun…)

Check out the Spill It Sister podcast for the latest news and gossip from MTV and beyond! Here is Leah and Ally’s latest hilarious episode breaking down The Challenge.

Are you excited with KCav’s return to The Hills, or are you ‘dunzo’ with the Uncommon James founder? Drop your opinion off in the comments!