The 'Anaconda' rapper makes her debut on the season 12 premiere. 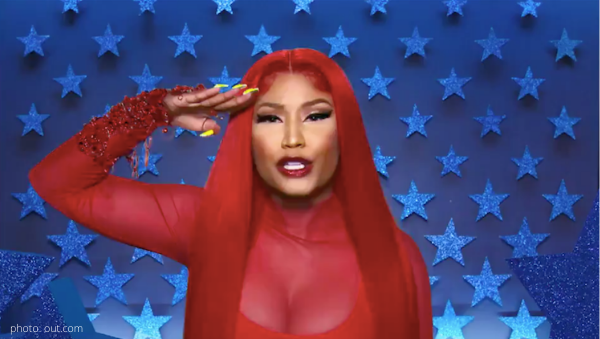 Here’s your first look at Nicki Minaj on RuPaul’s Drag Race judging panel. The ‘Anaconda‘ rapper makes her debut on the RPDR season 12 premiere. “The judges panel just got a little more ROYAL…The Queen of Rap is here! 👑 Don’t miss @nickiminaj on the #DragRace Season 12 premiere – FRI 2/28 on @VH1! 🌈💋.”

Nicki sits on the RuPanel with the show’s leeeegendary judges Michelle Visage, Carson Kressley, and Queen, Mother Ru herself. Is anyone else gagging right now?

In a promotional ad, Nicki stated, “I pledge allegiance to the drag!” The clip also teased the rap icon’s runway reactions, including  praise for a dragtestant who looks “like a Barbie out of the box,” which is a huge compliment from the Pink Friday artist who refers to herself as ‘Barbie.’

Though this will be Nicki’s first time on RPDR, her likliness has already appeared on the hit show. Trinity K. Bone’t previously portrayed Nicki during season 6’s ‘Snatch Game‘ celebrity impersonation challenge.

Never forget season 10’s champion, Monét X Change, performance of ‘Pound the Alarm,’ in one of the most memorable lip-syncs in the show’s her-story.

EW.com got an exclusive interview with RuPaul who revealed that “the best word to describe season 12 is ‘OVANESS!’ before teasing that ‘producers have come up with twisted, outrageous challenges that raise the bar for all competition of reality’ and promising ‘truly legendary’ guest judges (more of which are expected to be announced in the weeks ahead).”

If you need more RPDR in your life, you should check out the Alright Mary podcast. The hosts, Colin and Johnny, hilariously recap the episodes and drop other hot news from the world of drag.

Which celebrities would you like to see on RuPaul’s judging panel? Drop names in the comments!