The boy bander stuck his tongue out and used both hands to flip off the photographers. 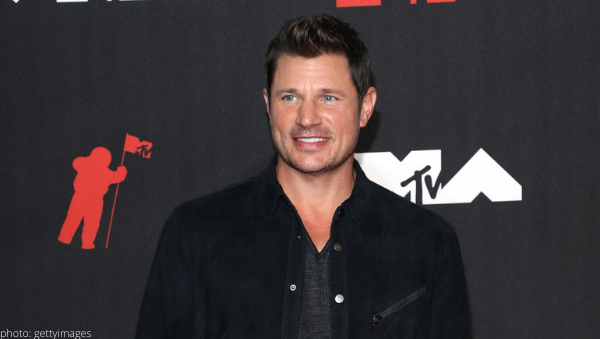 Boy bander/Love Is Blind host Nick Lachey was caught lying about a physical interaction he had with a female photographer.

TMZ reported the winner of The Masked Singer confronted a woman who was trying to snap a photo of him and his wife Vanessa Lachey.

Apparently Nick was unaware his actions were caught on video when he tried to defend himself.

“Nick and his wife, Vanessa, went out to eat at Mastro’s in Beverly Hills Sunday night … after seeing a photog taking pics of him from her car, he made his way across the street, allegedly punching her window and calling her a “p**** mother f*****.” Vanessa was yelling for her to open her car door.”

As you read the rest of this article, keep in mind the female photographer never got out of her car.

Nick’s side of the story:

“Last night, after enjoying a great dinner with my wife and our dear friend, the paparazzi harassed us as we walked back to our hotel.”

“I clearly overreacted. I’ve been in this game long enough to know that their antics are sadly part of the deal. Stupid of me. Done.”

A second tweet stated, “However, for TMZ or anyone else to say that I was violent or that I ‘got physical’ with someone is reckless and absolutely false. Once again, TMZ likes to crate their own clickbait narrative. Life’s too short, we move on.”

In the video released by TMZ (which didn’t begin until after Nick allegedly hit her windows and called her profane names), the female photographer remained in her car and asked,  “[What are] you so mad for?”

Nick proceeded invade her space by reaching into her open car window trying to confiscate her camera.

Prepare to cringe even harder…

‘Obviously’ Nick Lachey then stuck his tongue out at the photographer before walking back across the street to join Vanessa and the their friend.

Another photog stepped in:

A male paparazzi can be heard asking Nick why he was “swinging at girls.”

Nick continues to call the man “the worst,” flashed both middle fingers, and posed his arms in an ‘X’ shape, much like contestants on Family Feud when they are trying to psych out their opponents.

The second half of the tweet said, “I clearly overreacted. I’ve been in this game long enough to know that their antics are sadly part of the deal. Stupid of me. Done.”

So, basically, Nick admitted to inappropriate behavior in the first tweet; however, denied getting “physical” in the second tweet.

Looks like The Hardest Thing crooner thought he could sweet talk his way out of this one, but videos don’t lie.

Do you think Nick will eventually acknowledge the truth and apologize or is will he continue to “move on” without consequence? Sound off in the comments!