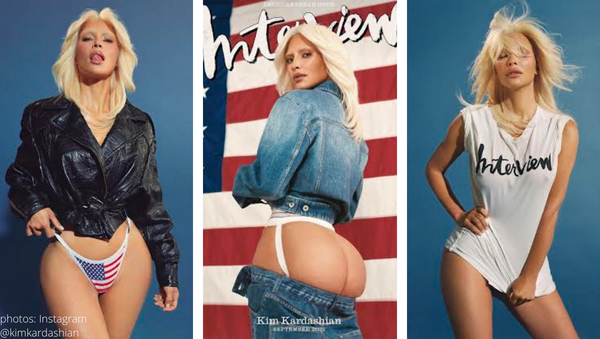 Kim Kardashian was featured in an early aughts American aesthetic for the September 2022 cover of Interview Magazine.

The only thing to overshadow Kim’s bleach blonde hair and her exposed derrière was the Keeping Up With the Kardashians alum’s bleached eyebrows.

Choices were made regarding Kim K.‘s latest look, so, naturally, social media did its thing…

As a child of the 2000s, this is what the Kim k photo reminded me of pic.twitter.com/GQEubr2Vzl

Kim K look like the guy from Blades Of Glory.. pic.twitter.com/HFqaEqCCZn

Kim K as Hedwig!
One is FABULOUS!!!
The other is Kim K. #PoopeusMaximus pic.twitter.com/BOFncjakJV

like I seriously thought that Kim K pic was @biminibabes at first!!! pic.twitter.com/ngOR7osRHe

What are your feelings on the latest phase of Kim K.’s fashion journey? What does her latest look remind you of? Sound off in the comments.