On her upcoming most CRINGEWORTHY moment & SECRET AUDIO tapes?! 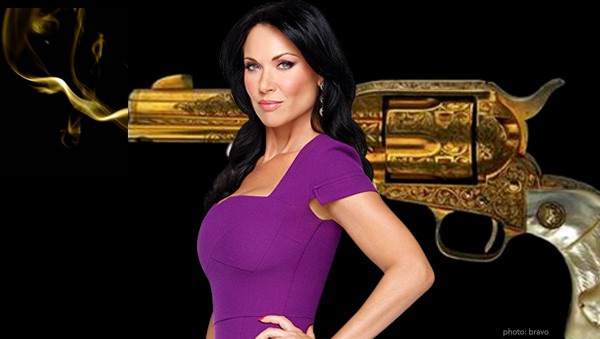 We caught up with Real Housewives of Dallas fan favorite LeeAnne Locken this weekend and boy did she have some Texas-sized tea to spill! Her Season 2 tagline reads “I’m a true Texan. No bull, but all horns.” and truer words may never have been spoken. As fierce as a lion and looking hotter than a carny hot dog, she sat down to give us the scoop on her beef with Brandi/Stephanie/Cary, whether or not she’s engaged AND even some top secret recordings gossip!

LeeAnne: Howdy! *dogs barking* Those are my babies!

TOR: Before we get into the good stuff. Tell us – what you love about Dallas?

LeeAnne: The community. The people. You can’t find better people than Texans. When they say “hi”, they really mean it.

TOR: What is a day in the life of LeeAnne Locken like?

LeeAnne: My beagle wakes me up wanting to cuddle! Then, I head straight for Keurig in the kitchen. I sit in front of my computer and get on FB, Twitter, and dedicate about 2 hours to social media. Then I go on with my day, lunch meetings or out with friends, get my hair done, get a massage. My days are really just prepping for my nights which are always different. Events. Parties. Like last night…  I went out with my friends Heidi, Steve and Chad. Someone said we were wearing sombreros in the car. It’s a little blurry!

TOR: I did notice you spend a TON of time talking to fans on social media!

LeeAnne: I just feel that if someone’s going to take the time to reach out, at the very least I owe them a response or at least a like.

TOR: Do you respond to haters?

TOR: What can we expect from you in the future business-wise?

LeeAnne: I’ve got my book, What’s Your Status?, and I’m pitching these sunglasses on my website to make sure people are “shade-ready” on Monday nights. But, honestly, no… not really. I’m not trying to be something I’m not by putting my name on clothes and all that. I’m just gonna do me.

TOR: What about your inspirational blog?

LeeAnne: D’Andra gave me some advice this season. You can’t be a f***ing b**ch and 5 minutes later share an inspirational quote… so I’m switching it up. I gotta keep it real!

TOR: You’re big on charity but what are your thoughts on the fan feedback to tone down on all the charity from Season 1?

TOR: Brandi and D’andra seem to have very different feelings on the so-called “charity scene” – do you think Brandi is in the wrong for dissing it as pretentious or is D’andra taking it too seriously?

LeeAnne: Brandi isn’t in the charity world. She isn’t in the social world. When I go out, nobody knows who she is. She doesn’t know what she’s talking about. She has a tendency to form an opinion based solely on her opinion. As for D’Andra, she’s lived a life of non-profit. When you’ve raised millions of dollars like she has, if you don’t take it seriously, how are you doing it?

TOR: If Brandi showed up to an event would people remember the poo incident at Mad Hatters?!

LeeAnne: I’ll just say, people would say they’d rather her not come in!

TOR: You mentioned that in RHOD Season 1 that Stephanie’s charity/social world would go down the toilet… did your behavior from Season 1 affect yours?

LeeAnne: Oh, sure. I had a lot of people back away from me. The issue isn’t my reactions. Most people have my type of reaction, like, “I’ll kill you”, “F*** off”. The difference is that my cast members whole goal is to make me look bad by acting scared and playing the victim.

TOR: Maybe it’s because some say you’re the fan favorite?

LeeAnne: I don’t think they want to accept that! They think if they destroy my reputation that I’ll be removed from the show. But… I don’t think anyone wants to watch a show about a bunch of girls f***ing crying.

TOR: Do you feel better about how you’re coming across this season?

LeeAnne: At moments. I get Tweets all the time that therapy isn’t working! My therapist isn’t Jesus. If you hurt me, my instinct is to bite your head off. I’m a work in progress.

TOR: What did you think of last Monday’s WWHL?! People are saying it was very LeeAnne-centric!

LeeAnne: Right?! I felt like I was there. I didn’t even have to fly to New York! Why didn’t they just make the word of the night LeeAnn… then we all could’ve gotten s**t faced.

TOR: One of the things that came up on Watch What Happens Live was your boyfriend, Rich. Last episode you expressed concern about Rich taking a while to propose? Do you have a ring on that finger?

LeeAnne: I can’t show you right now! Talk to me on Tuesday!

TOR: Stephanie said Rich hasn’t proposed because he’s “scared and doesn’t want to die” – what did you think about that?

LeeAnne: I think she’s literally dumber than nails. It’s an idiot statement.  People gave it to her on Twitter hard after that. (BTW I don’t know what that thing was on her f***ing head either. Was her brain popping out?) Of course, Brandi started attacking me the next day.

TOR: What do you think Stephanie’s real issue is with you? –

LeeAnne: No clue. Ask me if it affects me. It doesn’t.

TOR: What about Cary? Do you think she was being authentically nice at the beginning of Season 2?

LeeAnne: HELL NO! We’ll definitely get into that later.

TOR: Do you still have a soft spot for Brandi?

LeeAnne: Well, if I did, she has dug a lot of it out right out of my skull. At this point in time, with the tremendous amount of ugly she’s thrown at D’Andra, Kam and me, I am reserving my opinion. I’m watching the shows too and was told completely different things while we were filming these scenes. It’s heartbreaking. BUT… I have audio records of what I was really saying. I’m 50 not 4. Do you really want to put me on the wrong side of the fence?!

TOR: Do you think you’ll get an apology from anyone?

LeeAnne: Everyone expects LeeeeeeeAaaaaannnn to own up to everything. They’ll just say they were joking when they say something. If you smack me, it’s a joke. But if I smack you, the waterworks?!

TOR: What has been your most cringeworthy moment?

LeeAnne: Ha! This upcoming MONDAY NIGHT on Season 2 Episode 6 (9/18). Yup, it’s bad. Last season it was Cary’s cowardly way of coming downstairs and secretly recording me. *winces* If anyone including Marie would have said “LeeAnne that’s enough.” it would have stopped.

TOR: Are you going to throw something on Monday!?

LeeAnne: No! Not yet anyway!

LeeAnne: Something that’ll shatter! I have never pitched a fit with a pair of jeans.

TOR: What do you think makes a good Bravo housewife?

LeeAnne: When they can speak the truth the minute they think it. Apologize. Get drunk. Have FUN!

TOR: If you had to be stuck on an island with any other housewife from any season or city, who would it be?

TOR: Who would you least like to be stuck with?

LeeAnne: Someone from my own cast.

LeeAnne: Dorinda. I mean… when she goes off on someone. CLIP!

TOR: Ha! You might be in the running. But what about Daneille Staub? Can you believe she’s coming back to RHONJ?

LeeAnne: Or TERESA GIUDICE. Would you wanna cross her? I wouldn’t.

LeeAnne: Bethenny is just no bulls**t. I would love to see her interact with the Real Housewives of Dallas!

TOR: Who do you think your show could do without and why?

LeeAnne: Oh gosh. I don’t know if I can answer that. I do think we need an adult cast. D’andra and I try to stay above it but it’s hard.

TOR: Thanks, hon! We can’t wait for Monday night’s episode of RHOD!

LeeAnne: Get ready and hang on tight!

Click HERE for all the bars, restaurants, and shops from RHOD! 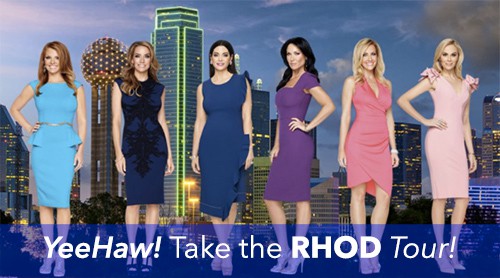 2 Comments for Our loaded interview with RHOD’s LeeAnne Locken!