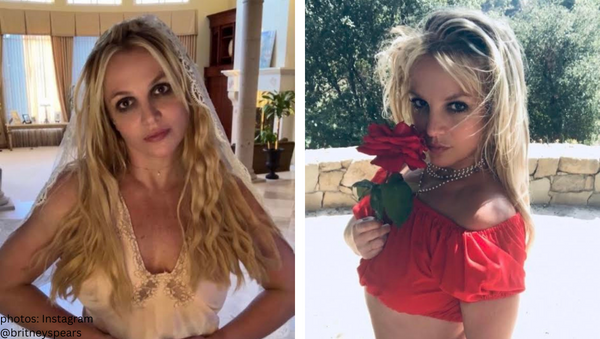 Days after TMZ ran a story claiming Britney Spears had a “manic” episode at a restaurant, the waiter who served the Queen of Pop and her newlywed husband, Sam Asghari, set the record straight.

Spearleaders from the Twitter account #FreeBritneyLive reached out to Joey for the truth of what happened that night.

“Britney did not have a ‘manic’ episode as is being reported by TMZ. She was upset (but not overtly) when another patron started filming her and held up a menu to shield herself.”

“According to the waiter, what you see going on in the video was him asking her if they wanted to be seated somewhere else more private, but by then they had already finished their meal and opted to leave instead of being moved.”

“Sam went to the restroom, he didn’t storm off as TMZ reported.”

“Because they were being filmed, the restaurant staff let Britney and Sam leave without paying so they could get out of there ASAP so as to not continue to be filmed, while they waited for their bodyguard to go in and cover the bill.”

“The person who filmed Britney was also asked to leave, and won’t be allowed back.”

“The waiter was deeply apologetic to Britney, and she told him not to worry about it and that this has been “going on for years.” He says she was the kindest person despite the uncomfortable situation she was put in by the person doing the recording.”

“The restaurant also said the person who did the filming has been banned from dining at ANY of their restaurants for the foreseeable future.”

ICYMI, we spoke to the waiter from JOEY who served Britney and Sam on Friday night, and here’s what he had so say! #JusticeForBritney #LeaveBritneyAlone pic.twitter.com/GnEEdMaEdW

Do you think Britney will ever get the peace she deserves? Drop your opinion off below!