The adventurous couple even zip lined together! 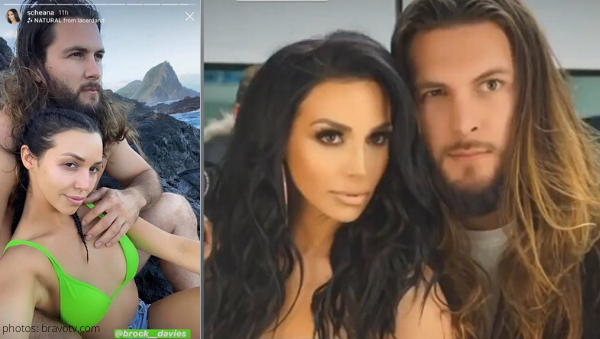 Vanderpump Rules‘ Scheana Shay and boyfriend, Brock Davies, live it up in Las Vegas! The couple enjoyed time at Planet Hollywood resort where the SURver took the opportunity to relax in one of the hotel’s luxurious rooms. Scheana captioned a nude photo of herself in a bubble bath, “Sippin bubbly, feelin lovely 🥂🍾” to the ‘gram.

One of Scheana’s followers asked who took the sultry bubble bath photo. Scheana gave her beefy boyfriend, Brock, a shout out for his photography skills.

According to The Blast, the couple of four months did a lot more than just relax. In fact, they also spent time in lovely downtown Las Vegas, specifically, The D Casino Hotel. Scheana loves ‘The D,’ in fact it happens to be one of the Good As Gold singer’s favorite spots. (I’m a Las Vegas local, and yes- we call that hotel/casino ‘The D.’ The fact that Scheana loves it is poetic.)

“We’re told before dinner, Scheana Marie and Brock hit up the world-famous SlotZilla Zoomline, which is located on the Fremont Street Experience. The SlotZilla gives its customers the ride of a lifetime 11 stories high in the air while they soar over the 5-block long Fremont Street. Scheana Marie also taped some footage for her YouTube channel, and the couple enjoyed taking the plunge on the special night of romance,” according to reports from The Blast.

The adrenaline rush from soaring through DTLV must have worked up an appetite! Scheana and Brock  headed over to Andiamo Italian Steakhouse, located inside ‘The D.’ The celebrity news outlet reported, “Brock Davies was definitely feeling the romance in the air and even gave a rose to his reality star girlfriend, which caught the attention of fans and onlookers. We’re told Scheana posed for a ton of photos and met with fans of Vanderpump Rules.”

If you would like to learn about my night with Scheana and many of her VPR costars from the grand opening party of Vanderpump Cocktail Garden here in Las Vegas, you can read about it here or listen to a bonus episode of the On This Day Entertainment podcast here.

Would you like to see Brock on Vanderpump Rules? Sound off in the comments!