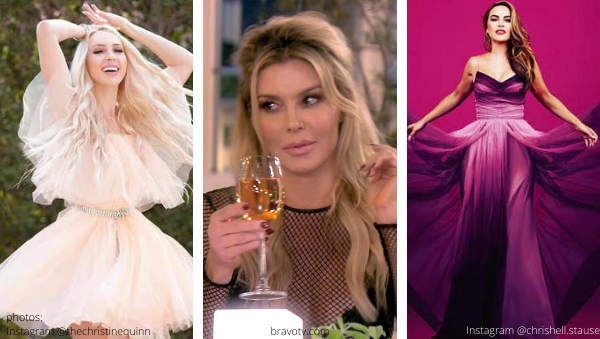 Are you SOLD on the the drama seen on Netflix‘s hit reality series, Selling Sunset? If so, you may want to re-invest as Christine Quinn exposed the truth on Brandi friend-of Real Housewives of Beverly Hills Glanville‘s podcast regarding her relationship with co-star, Chrishell Stause.

“From day one, obviously the producers had certain things in mind,” Christine shared on the latest podcast episode of Brandi Glanville Unfiltered. “They wanted us to clash obviously and at first, we didn’t. We got along great. We were friends. She was at my house. We were drinking, having a good time. I was getting to know her and the story lines came into play…We thought that we were good at separating things.”

When things changed between Christine and Chrishell:

Selling Sunset stans will remember the fight that began during Maya Vander‘s gender reveal party during the season 1 finale. You know, when Christine accused Chrishell of not owning up to the things she says…right before Christine exclaimed, “Only my tits are fake. I’m not fake.”

Well, Christine told Brandi that she and Chrishell would call each other after filming to ensure things were good between them. “We thought that we were good at separating things,” she said, before adding that sometimes, that call wouldn’t come. “Then we realized, ‘Oh s–t! This is affecting our real lives.’ I never wanted to fight with her. Are you kidding? Her and I had drinks. I made her dinner. I didn’t want that. That wasn’t me.”

Christine gives herself a shout out:

Honestly, I don’t know if we would have gotten picked up if it wasn’t for me acting like a drunk s–t show.” I bet Brandi felt so connected to Christine in that moment.

But what about Christine’s comments about Chrishell and her ex, Justin Hartley?

Though Christine claims she and Chrishell have checked in with each other since the season one finale snafu, there have been other public issues between the high-end real estate agents.

Remember when Christine did an interview right after the news of Chrishell’s divorce dropped when she gushed over the man who just left her co-star. In case you missed it…

Christine laughed about the scandal with Brandi, “When people are like, ‘Oh my god! I can’t believe you commented on Chrishell’s divorce.’ I’m like, ‘Yeah, of course. I’m getting paid to! What do you mean?’”

If anyone could relate, it’s Brandi Glanville.

Will there be a season 4 of Selling Sunset?

While season four of Selling Sunset has yet to be announced, Chrishell teased some good news to her Instagram followers.

I don’t know about you, but Selling Sunset has been a high point of a super low time, so please make this happen. I need this . WE need this….

According to an interview with E! News, Christine revealed that she would be open to joining another popular reality show- Real Housewives of Beverly Hills! “I would love to be a housewife,” Christine admitted. “I feel like I’m too young now and I know Erika [Jayne] and Dorit [Kemsley] are very similar to me so obviously I think that’s a conversation that would happen a few years down the line but I would die to be on Housewives.”

Does anyone else love the low-key age shaming here? THIS is why Christine needs a diamond.

Check out the season 1 and 2 breakdown of Selling Sunset that I recorded for the On This Day Entertainment podcast with David Yontef from the Behind the Velvet Rope. Listen here!

Do you believe that Christine and Chrishell are friendly in real life? Drop your opinion off in the comments!