Sonja dropped her thoughts on what Tinsley's future has in store. 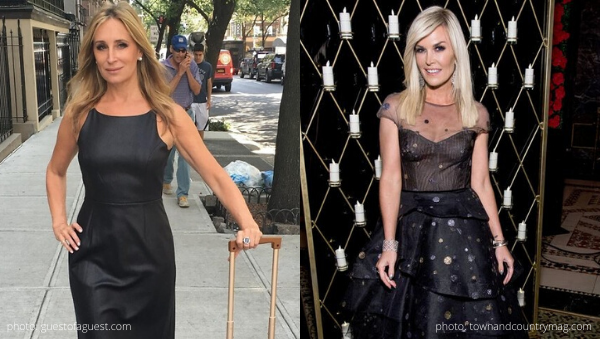 Real Housewives of New York star, Sonja Morgan, can’t seem to keep Tinsley Mortimer’s name out of her mouth. Sonja dropped her thoughts on what Tinsley’s future has in store, and threw some low-key shade while she was at it.

According to reports from The Blast, “Tinsley will return for season 12, but it will likely be her last.”

“Tinsley moved to Chicago, but she’s not a New Yorker. She’s from Florida, she lived in Florida — that’s her residency. She’s never really been a New Yorker, she’s been living in a hotel, and you know I’m happy that she’s happy. She’s much happier where she is, let me tell you that. I can see it. … I’m not going to miss filming with her — what I’m going to miss is seeing her often,” according to an interview Sonja did with US Weekly.

Do you find that quote as shady as I do? Sonja saying Tinsley is not a New Yorker as she lived in a hotel, that she won’t miss filming with her friend, yet will miss hanging out with her…Strange!

I feel like Sonja heard how sketchy she sounded, then threw in the old “I’m going to miss seeing her often,” to cover her shade- but that’s just me.

Though Tinsley will appear on the 12th season on RHONY, she wasn’t at all of the filming sessions. Fans noticed the socialite was missing from the season 12 cast trip to Mexico after her proposal to Coupon King, Scott Kluth. A source told US Weekly, “She didn’t go on the girls’ trip because she just got engaged to Scott and she is in Chicago as they want to be together during this happy time. She is not going to girls’ dinners and girls’ trips when this is a time she should be spending with her new fiancé.”

If you can’t get enough reality tv news, you should check out the On This Day Entertainment podcast, where I break down this story and all the other big entertainment news for the week. Here’s this week’s episode!

Do you think Sonja’s comments about Tinsley were shady? Sound off in the comments!