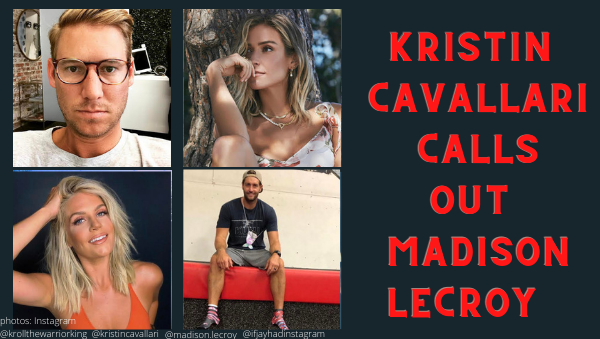 KCav made an appearance on Craig Conover and Austen Kroll‘s new podcast, Pillows and Beer. The Uncommon James founder & CEO hinted -not so subtly- that Madison LeCroy wanted ex-NFL star, Jay Cutler, to make an appearance on the Bravo‘s popular reality show.

“This girl just wants me to be seen with her.”

I feel like people aren’t talking about this enough.

In April 2020, The Blast reported that Kristin is accusing Jay of “inappropriate marital conduct” and is demanding primary custody of their three kids.

At the time, it looked like Kristin’s former friend, Kelly Henderson, may have helped put the ‘inappropriate’ in Jay’s marital conduct. Knowing what we know now, maybe it was Madison….

That would explain the following drunken display-

More of Kristin and her famous friends:

Kristin made news earlier this week after her former co-star from The Hills, Heidi Montag, after 1/2 of Speidi posted a Tik Tok of the MTV stars dancing. Both of the moms teased they were filming season two of The Hills: New Beginnings.

Whose team are you on? Drop Team Kristin or Team Madison in the comments!