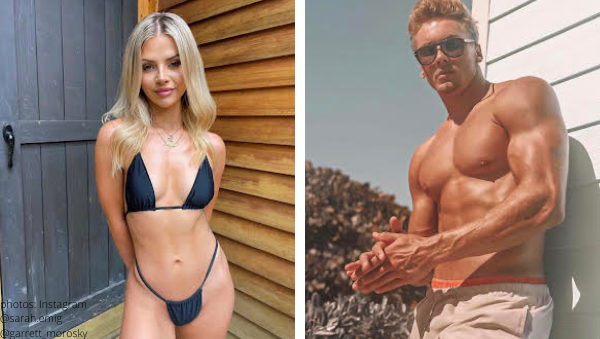 This FBoy is back in the game!

Literally, the day after FBoy Island‘s Sarah Emig dished to TMZ that it would take a ‘big gesture’ to help her get over how Garrett Morosky ‘did me really dirty’ after he did, in fact, ’embarrass’ her in front of an international audience, she was seen with the FBoy at an upscale grocery in Los Angeles.

Sarah confessed, “I wanna hear him out. I wanna hear what he has to say” even though “I don’t think I can trust him. Not yet…”

When Garrett was asked if he is a reformed FBoy, he responded, “Maybe, maybe not.”

You be the judge…

FBoy Island beauties Sarah Emig and CJ Franco were busy doing hot girl sh!t in Beverly Hills when TMZ caught up with them for an exclusive interview- just days after the gossip outlet bumped into two self-proclaimed FBoys, Garrett Morosky and Casey Johnson.

The aftermath of Garrett’s actions:

Sarah’s attitude was shockingly positive- considering how she was burned by self-proclaimed FBoy, Garrett, on international tv.

“He just did me really dirty on the show, obviously. I came on the show for an adventure- and I got that. It wasn’t what I expected.”

“He did embarrass me on the show. So, in order for me to even consider a date or something where he apologizes. I think it would have to be… he’d have to give me a big gesture.”

“The show ended how it should have. I don’t regret any decision that I made. I know a lot of people were talking about Josh and I should have ended up with him, but…”

“I do think the show ended up how it should be in real life. We should have went [sic] our separate ways especially seeing how he acted. So, I’m glad it ended the way it did.”

“I think this was a women empowered show and I did think the girls would have more of a say of who got the money in the end ’cause we really had no idea how the money worked.”

“Obviously, the FBoys shouldn’t be rewarded for FBoy behavior and I think that’s the beauty of the show.”

“Everyone got what they deserved:”

The $100K that Garrett chose over a relationship with Sarah (along with $50Khalf of the prize money) went to an anti trafficking organization.

Want more from the cast of HBO Max‘s FBoy Island?

Check out the Get’n Cozy with Erin Hill podcast for exclusive interviews and more!

Do you think that Sarah will end up giving Garrett another chance? Sound off in the comments!

“I have plenty of everything — including opinions”… and microaggressions.