Emmanuel Acho To Replace Chris Harrison On 'After The Final Rose'

"IT’S OFFICIAL: I’ve accepted the Rose & am honored to be hosting..." 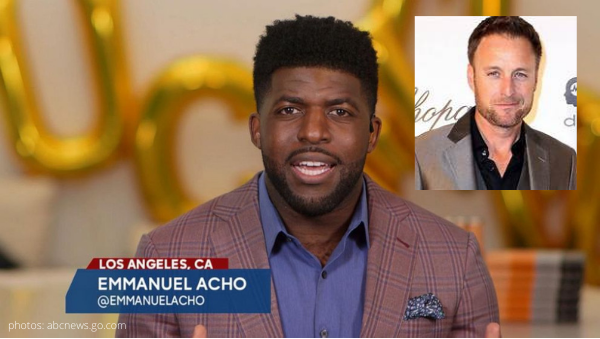 “IT’S OFFICIAL: I’ve accepted the Rose & am honored to be hosting the @bachelorabc After the Final Rose this year.” –Emmanuel Acho (In case you missed the scandal that rocked Bachelor Nation to its core, catch up here!)

IT’S OFFICIAL: I’ve accepted the Rose & am honored to be hosting the @bachelorabc After the Final Rose this year.

It’s been a pivotal season & this episode will be one of the most storied shows in its history. Empathy is needed and change is coming. See y’all then! 🌹 ❤️ pic.twitter.com/eWBXT6Kv6J

The 2021 ATFR host used his Instagram platform to introduce himself to Bachelor Nation.

“I’m the author of 2020 NYT best seller, ‘Uncomfortable Conversations with a Black Man,’ A book that answers all the racial questions you’ve been too afraid to ask. Go read it. I also graduated from the University of Texas with a masters degree, I played for 4 years in the NFL, and I currently host a sports show, @sfyonfs1. Lastly, I love being a bridge for reconciliation. Our world is disconnected & divided, my goal is to unify.”

TMZ reported, “It’d been widely rumored that Emmanuel would get a serious nod from ABC … especially after Rachel Lindsay — the first Black ‘Bachelorette’ in the franchise — publicly name-dropped him recently as a great potential option to step in for Chris.”

Rachael thought Emmanuel would “be ideal since he has no affiliation with the franchise, and could be relatively neutral. Not just that, but Emmanuel is Black too … and well-versed in issues of race, as he’s quite vocal on his own programming. He seems pretty stoked for the opportunity too.”

Emmanuel is going straight into the hot seat as host of ‘After the Final Rose.’ Keep in mind, he will be facilitating a conversation between the current (first Black) Bachelor and finalist Rachael Kirkconnell, who attended an Antebellum party just three years ago.

Want to stay up-to-date on all things The Bachelor, The Bachelorette, and Bachelor In Paradise?

Check out the Get’n Cozy with Erin Hill podcast for hilarious recaps and EXCLUSIVE interviews from Bachelor Nation and beyond. Here is the latest episode.

Are you excited to see a new host for ATFR? Drop your opinion in the comments!