Many applauded Stassi's bravery, while others questioned her motives.

Fired Vanderpump Rules star, Stassi Schroeder, made a guest appearance on the Tamron Hall Show to give her first interview after Bravo cut ties with her after multiple racist statements and actions.

The reality tv personality explained to audiences why she kept a low profile after being fired.

“People expected me to just understand everything immediately and things like that take time. And I felt like it would be better for me to take the time to get a greater understanding of everything and the issues before I opened my mouth again. I’m someone who messed up quite a few times. I am the reason why I am in this situation. I think a lot of people wanted me to focus on cancel culture and whether I was a victim or not but it’s not how I feel at all.”

The soon-to-be first time mom explained, “I’m someone who messed up quite a few times. I am the reason why I’m in this situation. I think a lot of people wanted me to focus on cancel culture and whether I was a victim or not, and it’s just not how I feel at all,” she reasoned.

Stassi even went so far as to call herself a ‘Karen.’

The former SURver also mentioned she hired a diversity coach to help her understand her own privilege and help her to become ‘anti-racist.’

@tamronhall Diversity coaches are real. Kudos to @StassiSchroeder for sharing her experience with a diversity coach. @tamronhallshow Cheryl Cofield is an attorney and a professor. Let me know if you want her information to be on your show.

An Instagram user wrote, “While I think the interview was very insightful, I get frustrated when the interviewer does not let the person finish answering the question. For example Tamron kept pushing the statement, she does not believe that Stassi did not understand how being raised in a big city and not being exposed to black culture. I believed that Stassi was sincere in her acceptance of being wrong and has learned from it. Tamron at the end said she believes her as well but her tone was not acceptable.”

Tamron wasted a golden opportunity to demonstrate how we can move on as a society, and she chose to pile on the blame. Everyone has the capacity to make mistakes, and to be forgiven when they try to atone for them. THAT is what has to come after cancel culture if we want peace.

I have to be totally transparent here….I had a hard time finding positive feedback regarding Stassi’s Tamron Hall Show appearance. The following posts came from the Facebook group, Straight Up With Stassi: Khaleesis, which is a group of Stassi super fans. That should tell you all you need to know about how the interview went…. 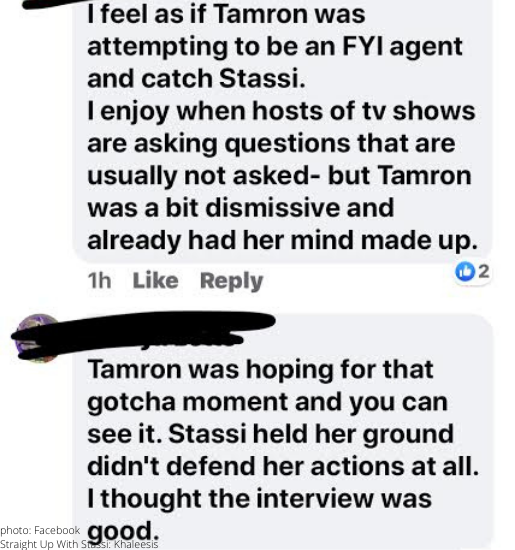 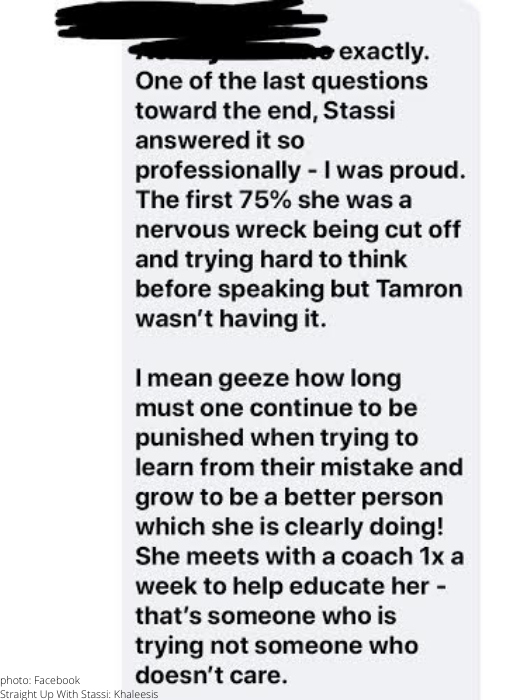 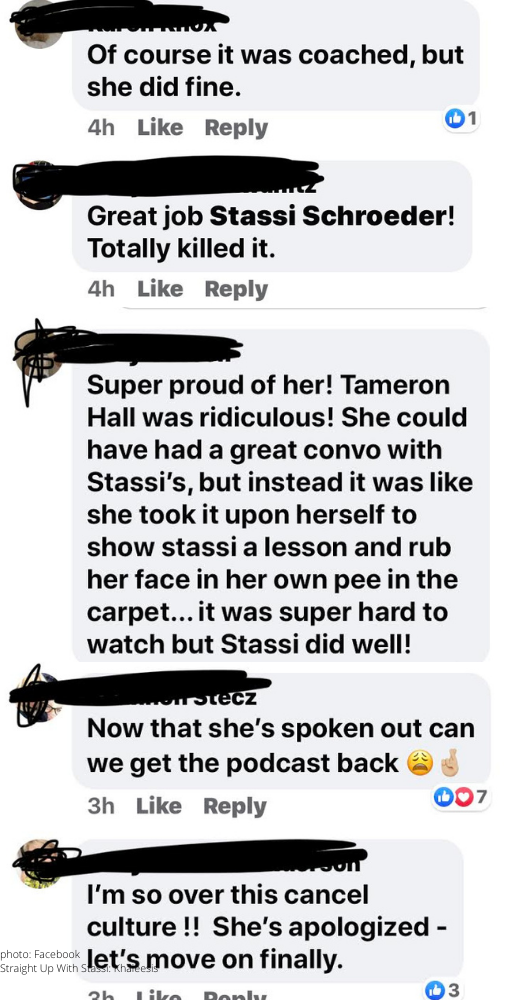 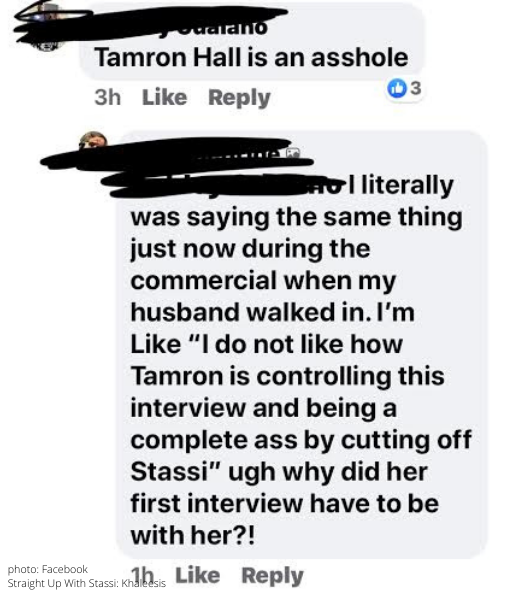 An Instagram user posted, “Tamron was definitely on the case, but girlie offered up rote responses; not convinced she’s learned from her experience. She seemed disingenuous to me. How can you be an adult and not understand that Nazism and racism are pure evil?”

Me during this whole Stassi Schroeder interview. Whew chile…#TamronHallShow pic.twitter.com/Yv0eYnr9fM

Tamron wasted a golden opportunity to demonstrate how we can move on as a society, and she chose to pile on the blame. Everyone has the capacity to make mistakes, and to be forgiven when they try to atone for them. THAT is what has to come after cancel culture if we want peace.

Saw the @Stassi interview and she *says* she gets it, but that’s almost impossible this quickly. All she needed to say is that she didn’t understand, but she’s trying, she’s learning and she’s dedicated to do better, and that’s it.

@stassi barely looked up throughout interview. So why do an interview? Guess her team didnt prep her that well to face her comments and behavior… @tamronhall

Stassi can’t stand the thought of getting no attention so now she apologizes. How about her comments about the Holocaust, Jews and trans people? She needs this cancellation.

@stassi this was a huge image rehab failure.

Boots on the ground:

Here is a Facebook post from an audience member from Stassi’s appearance on the Tamron Hall Show.

The most shocking of Stassi’s revelations, imho:

Considering Stassi’s history on reality tv (never forget she was on The Amazing Race in 2005 and on Queen Bees in 2008, I was indeed shooketh to learn Stassi isn’t interested in returning to reality tv. “I think getting drunk and starting conflict and misbehaving on a reality show isn’t my journey anymore. Does this mean Stassi IS evolving?!?!

A post shared by OnThisDayEntertainment (@onthisdayentertainment) on Sep 17, 2020 at 10:22am PDT

Do you think Stassi has changed or is this all a public relations stunt? Drop your opinions off in the comments!