Justin, Chrishell and Sophia starred on The Young And The Restless together in 2016! 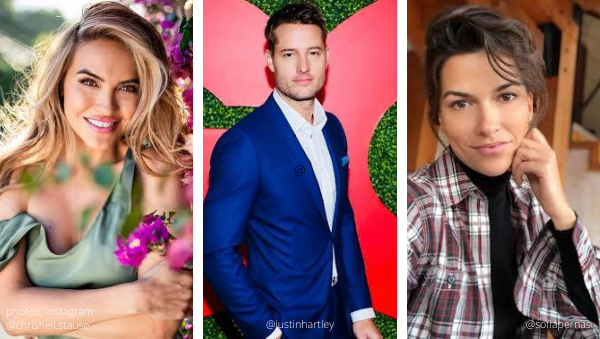 As if learning of your impeding divorce via text message wasn’t enough, soap opera royalty turned Selling Sunset star, Chrishell Stause, got hit with another metaphorical ton of bricks when she learned J*st*n H*rtl*y (who will be referred to as Fartley for the remainder of this article) was ‘hooking up’ with.

At the end of May, TMZ confirmed the This Is Us actor had moved on with a new(ish) woman, his former co-star from The Young And The Restless, Sofia Pernas. The craziest part is that Chrishell, Fartley, and Sophia all worked on the iconic soap opera together in 2016. (Chrishell and Fartley began dating in 2013.)

An insider dropped some hot gossip off with In Touch regarding Chrishell’s reaction to hearing her ex was canoodling with his former Y&R love interest. Chrishell “felt stabbed in the heart,” which was seen by everyone who watched Selling Sunset season 3.

“Justin twisted the knife even deeper by making their relationship Instagram official,” the source elaborated. “She had her suspicions that something was going on between Justin and Sofia before they went public and is still trying to put the pieces together and figure out the truth.”

Fartley claimed “irreconcilable differences” as the reason for their split.

Us Weekly confirmed in late 2019 that “Hartley filed for divorce from Stause after two years of marriage. A source revealed the following month that he ‘had been having problems with the marriage for a while,’ but ‘the divorce filing was a big surprise to everyone around Justin and Chrishell in terms of their friends.’”

Subscribe to the On This Day Entertainment podcast to say up-to-date with all your favorite celebrities! Here is the most recent episode.

Do you think Chrishell is as sweet as she appears on tv? Drop your opinion off in the comments!