Who else is sashaying their way to Ru's judging panel? 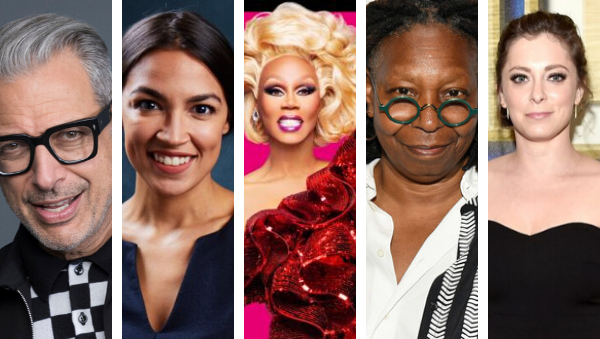 Meet the celebrity guest judges for the 12th season of RuPaul’s Drag Race! From Alexandria Ocasio-Cortez to Whoopi Goldberg, this is just the beginning. Prepare to gag!!

In case you missed it, Nicki Minaj is kicking off the season 12 premiere off at the show’s celebrity judge, but the big names don’t stop there. Without further ado, here are the celebs joining Queen Mama Ru, Michelle Visage, Carson Kressley, and Ross Mathews on the panel. (Shout out to both Carson and Ross from evolving from former celeb judges to full time judges for the 12th season of the Emmy Award winning show. Glad these two funny guys got to shontay stay on the show!)

When the New York congress woman isn’t busy saving the world, she’s fangirling hard for the Queens from RPDR.  Never forget the time AOC caught up with Sasha Velour after an NYC performance of her live show, Smoke & Mirrors.

Tonight THE most honored special guest came to see “Smoke & Mirrors” in Washington D.C. @AOC 💖 The audience gave her a standing ovation too! pic.twitter.com/XzHYGTuDb0

You may have been keeping up with Whoopi daily on The View, but never forget the actress was in blockbuster movies like Ghost, How Stella Got Her Groove Back, and Girl, Interrupted. I’m just curious if the girls on Whoopi’s RPDR episode will lip sync for their life to one of the many bops from the Sister Act soundtrack.

I’m coming back as Deloris Van Cartier in Sister Act The Musical for 6 weeks in London starting July 29, 2020. And I’m so excited to be playing with the great & talented Jennifer Saunders as Mother Superior. You can get your tickets at eventimapollo.com

Check out the rest of the judges!

Two more judges that I’m excited to see featured on RPDR season 12 are Mean Girls stars Daniel Franzese (Damian), who wants his pink shirt back and Jonathan Bennett (Aaron Samuels), who looks sexy with his hair pushed back, not just on October 3rd.

I interviewed my friend/LOGO red carpet correspondent, Adam Salandra, after the AJ and the Queen‘s premiere for the On This Day Entertainment podcast. Adam got to interview many of Ru’s girls, but had a particularly funny story about Mean Girls’ Johnathan Bennett (which we wondered why he was there- this must be our answer!)  In case you’d like to listen…

Which of the guest judges are you most excited for? Drop names in the comments!

Be the first to leave Comments for Meet The Celebrity Guest Judges Of RuPaul’s Drag Race: AOC, Whoopi, And More!