Home > Buzz The Vampire Diaries Stars - Where Are They Now?

The Vampire Diaries Stars - Where Are They Now?

They were feeling epic! 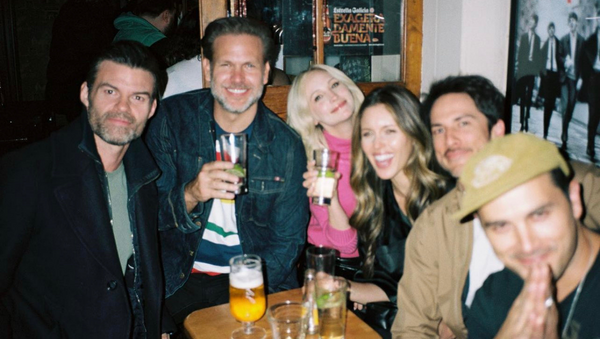 Vampires might be immortal, but the actors who played them only had a few years to live out their fantasies! From Damon Salvatore to Tyler Lockwood, find out where the cast of CW’s The Vampire Diaries are post eternal life.

TVD Stars Where Are They Now?

Ian Somerhalder didn’t venture too far away from the bourbon-obsessed vampire he brought to life for 8 years. Somerhalder is now the proud co-owner of Brothers Bond Bourbon –  an alcohol company he started with on-screen brother, Paul Wesley. Brothers Bond is a four-grain straight bourbon whiskey with nutty and caramel notes. Available here.

In addition to going into business with Ian Somerhalder, Paul went from one mythical land, to an intergalactic one – starring in Star Trek: Strange New World as Captan Kirk. Prior to playing Captain Kirk, he starred in the limited CBS series, Tell Me A Story, with a familiar face from the TVD Universe, Danielle Campbell.

After Elena lived happily ever after with Damon Salvatore, Nina went on to live another dream life – Wine Owner! Nina created Fresh Vine Wine with bestie Julianne Hough. According to their website, “Fresh Vine Wines are a unique collection of bold, crisp, and flavorful wines that embody a deeper connection with active lifestyles.”

However, Candice recently launched a new, solo podcast – A SuperBloom Podcast – all about navigating a new season of life post divorce from The Fray frontman, Joe King.

Candice now lives in Nashville with her two daughters Florence and Josephine.

In addition to acting, Kat is a devoted activist, lending her voice as a UN Ambassador and proud ally to LGTBQIA+. You can also catch Kat as her alias, Toro Gato via her singing career.

After graduating from his role as Matt Donavan on The Vampire Diaries, Zach has kept a rather low profile. Most recently, Zach is credited on Step Up: High Water. Prior to that role, he starred in Dare Me, as Sarge Will Mosley.

Our fave vampires, witches, and werewolves have been off air for almost 6 years, but thanks to streaming services we never have to leave Mystic Falls.

However, if you’re like me, and crave in person experiences, check out Epic Conventions! Epic has yearly TVDU cast reunions in the same town the show was filmed, Covington, Georgia. “I Was Feeling Epic…Again” is scheduled for April 14-16, 2023, with a current cast lineup including Paul Wesley, Zach Roerig, Michael Trevino, and more.

Want more blast from the past? Click here to find out what the One Tree Hill cast is up to!

Were you Team Damon or Stefan? Let me know down below!

Be the first to leave Comments for The Vampire Diaries Stars – Where Are They Now?