JWOWW said 'I do' on top of the Empire State Building. 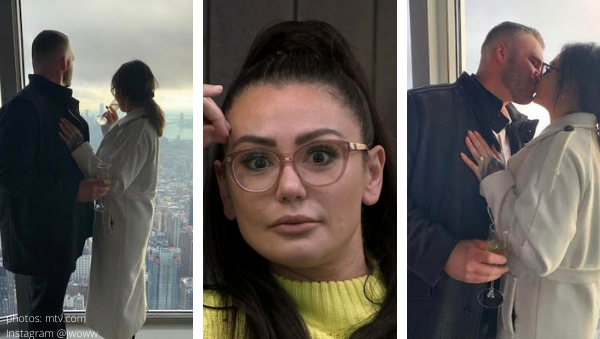 Congratulations to Jenni ‘JWOWW’ Farley, the latest member of the Jersey Shore family to get engaged!

JWOWW finally made it Insta-official, as she said “I do” to Zack Clayton Carpinello on top of the Empire State Building on February 27, 2021.

Zack shared the same photos to his Instagram page as Jenni with the caption, “My always and forever. You made me the happiest I’ve ever been. I love you more than anything @jwoww.”

Fellow Jersey Shore star, DJ Pauly D, dropped “Congrats to you both!!!!! 🙌🏽🙌🏽🙌🏽🙌🏽,” on JWOWW’s post while her BFF, Nicole ‘Snooki’ Polizzi left “Love you guys so much” with two kiss emojis on her bestie’s announcement.

Melissa Gorga from Real Housewives of New Jersey wrote, “Congrats!!! So happy for you ❤️ 🥂,” and former Mob Wives star, Drita D’Avanzo left “Congratulations my friend ♥️♥️wishing u the best😘😘😘” on her fellow Jersey girl’s post.

Want to stay up-to-date on all things MTV reality?

Check out the Spill It Sister podcast for hilarious recaps and the latest news and gossip from MTV and beyond. Here is the most recent episode breaking down The Challenge!

Would you like to see Jenni and Zack’s wedding filmed for Jersey Shore? Sound off in the comments!