VPR fan reactions flooded social media and will crack you up! 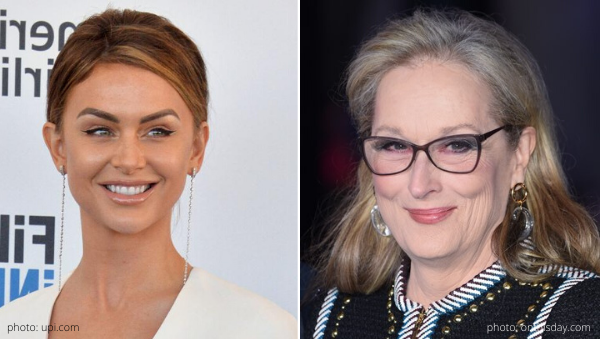 2020 has given us so much already. This time, in the form of a pairing we didn’t know we needed…

Vanderpump Rules star, Lala Kent, was seated near Hollywood icon, Meryl Streep, at the 2020 SAG Awards. During Sunday night’s ceremony in Los Angeles, the VPR beauty was seated near the beloved award-winning actress, who was nominated for outstanding performance by an ensemble in a drama series for Big Little Lies. Lala attended the awards ceremony with her fiance, Randall Emmett, who produced the film, The Irishman.

Fans took to social media to share the excitement of the Bravo/Hollywood hybrid.

Lala Kent and Meryl Streep: one person delivered one of the best performances on TV in the last decade, and the other is Meryl Streep

Another fan joked, “Lala from Vanderpump Rules was basically directly next to Meryl Streep at the SAGs and I’m sad because I don’t think Meryl knew she was seated next to perfection.”

Never thought that I’d ever see Lala Kent and Meryl Streep in the same shot in anything but here we are… https://t.co/iNFYqFMxcQ

Lala reposted fan videos to her Instagram story. Her IG story may only last a day, but this screen grab will live on forever. Enjoy!

Let’s have some fun. Let’s partner up Bravolebrities with A-list celebrities. I’ll start, Scheana Shay with Celine Dion. Drop your pairings off in the comments!