Find out the answer to this and other hard hitting questions! 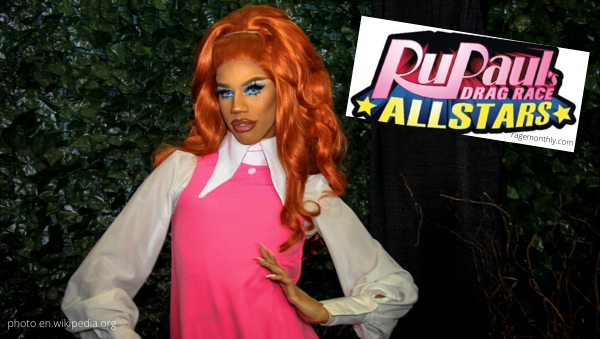 Check your lipstick before you come for Naomi…

RuPaul’s Drag Race‘s Naomi Smalls opened up with Cosmopolitan.com and dishes on the Werq the World tour, Bratz dolls, whether she’d compete on RPDR All Stars again.

Opinions on tour life, including being in close quarters…

Reflecting on her time as a travelling cast member of the Werq the World tour, Naomi explained, “I think ’cause I grew up with, like, 11 brothers and sisters, I’m used to being around so many different personalities. That part doesn’t really stress me out. I know that I’m the queen that takes, like, so long just to paint my face. I’m kind of anal-retentive about setting up my face. Once my face is done, the stress is gone. Pretty much when I wake up, all I think about is getting ready for the show.”

What keeps the gal who puts the ‘leg’ in ‘legendary’ sane?

“I have to bring my laptop with me so I can watch my trashy TV, my brainwash. I just like to get ready to the Kardashians. I’m obsessed with Kim Kardashian. I think that she has really made that empire. I like looking at people who do exactly what they want to do regardless of what the masses say. She’s just one of those people that you either love or hate for some reason, and I don’t think it’s an easy role to take on, so I think she’s a very strong person.”

On her Bratz doll aesthetic…

“I remember wanting Bratz dolls when I was a kid, and my mom saying absolutely not. They were dressed like hussies and they had clown makeup on or like clown prostitute makeup or whatever you want to call it. But I was always obsessed with the big eye look and the big lip look. And it really stemmed more from Pat McGrath for Dior, John Galliano early 2000s Dior makeup. They just kind of mixed a lot of that fashion in the Bratz doll collection. When I first started drag, I never thought I was going to be good or known for makeup. I get really happy when people do compliment my makeup. It’s come a long, long way.”

“And what do we do with fashion? Pose!”

When asked if Naomi would ever compete on All Stars again…

“I would absolutely not. I am super proud of myself that I got to walk away without having to cry holding a trophy and doing a weird message. I’m really happy with the mark that I’ve left on the Drag Race phenomenon or legacy—whatever you want to call it. I wouldn’t change it for the world, and I would not ever try to put myself in a competition setting ever again.”

In case you’d like to read Naomi’s full interview with Cosmopolitan, here ya go!

If you need more of RuPaul and her girls in your life, you should check out the Alright Mary podcast. Here is the most recent episode!

What are your favorite Naomi moments? Drop them off in the comments!