Braunwyn answered questions and clapped back at the haters. 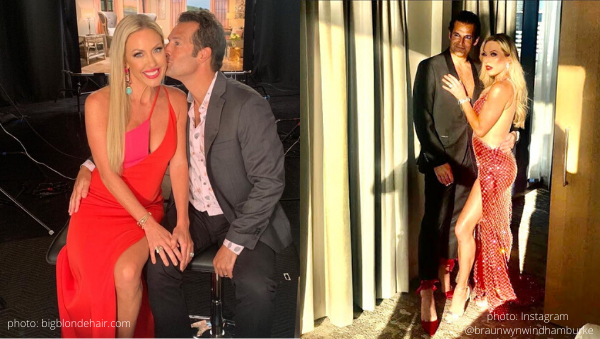 Real Housewives of Orange County star, Braunwyn Windham-Burke, and her husband, Sean Burke, support the Tantrums and Tiaras drag competition fundraiser in San Diego. According to Braunwyn’s Instagram page, Sean even wore fierce red pumps for the event! The mom of seven captioned the photo,  “Supporting our kid, supporting the community.”

The couple and their son, Jacob Windham-Burke, to San Diego this weekend, where the returning real housewife served as a judge alongside fellow RHOC cast member Emily Simpson at the Tantrums & Tiaras Drag Competition Fundraiser, which raises money for the San Diego LGBT Community Center.

“The Windham-Burkes definitely got into the spirit of the competition. Both Sean and Jacob had their makeup done, with Sean sporting ‘guyliner’ as Braunwyn called it. ‘The Housewife version of Pre-Gaming,’ she joked in an Instagram Story,” according to reports from bravotv.com.

Many supporters of the LGBTQ+ community supported the parents for supporting their son in such a manner. An Instagram user commented, “It takes a real man to walk I. Those shoes !! Badass,” while another wrote, “If more fathers would be supportive we would have less depression and suicides ….. slow clap for your man …. best dad ever 👏🏽👏🏽👏🏽💙.”

The mom of nine who looks like a ten woke up to a flood of questions and judgement regarding her husband’s choice of shoe for the event.

So supporting LGBTQ means your husband has to dress like he’s gay!! Support LGBTQ if you want in other ways

Braunwyn, once again, took to her IG story to bring awareness, normalize self expression, and school the haters. Get it, Braunwyn.

What do you think of Braunwyn and Sean’s wardrobe choice for the drag competition? In the words of the late, great comedienne, Joan Rivers, leave ‘Gotta Have It’ or ‘Make It Stop’ in the comments!