The original cast will "stop being polite and start getting real" (again) for a six-episode reunion series. 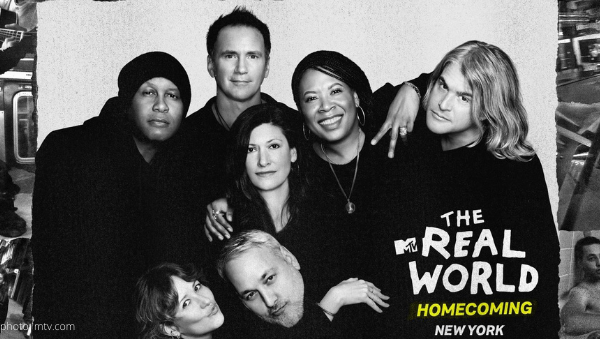 “This is the true story of seven strangers picked to live in a loft and have their life taped. Find out what happens when people stop being polite and start getting real.”

Did the nostalgia from that opening sequence give you chills?

“It was trippy, almost 30 years later, walking back into the same loft with these people.”

The iconic producer boasted to the publication regarding the cast, all these years later. “What’s so cool is they all have their essential essence, the thing that made us choose them for this first social experiment.”

A nostalgic look back:

Heather admitted that she was freaked out, as “The last time we were back in the loft, all seven of us, obviously, was in 1992.”

“I didn’t know we were going to be in the loft,” explained Rebecca, just before she “Burst into tears” seeing it again. She was delighted to add, “And it still had the scaffolding!”

Andre noted, “I’ve described this as like walking into a school that you’ve graduated from” because it has “That same sort of feeling: It’s very familiar, it’s very nostalgic, so much has stayed the same, only you’ve changed.”
Kevin has a different perspective going back, since he is still resides in NY, “I have driven and walked past and even skateboarded and bicycled past 565 Broadway many times. And I always thought to myself, ‘I’ll never go in there again.'”
But, alas, he did.
“It was the same feeling I had when we got in the first time. Because when we came the first time, I remember walking in, and it was like I had won something, like Ellen [DeGeneres] had given me a prize. I had won something on The Price Is Right. That’s what it felt like. And when it happened the second time, I was like, ‘What luck this is?'”
Eric added, “We’ve all stayed in contact over the years. We just all haven’t been in the same room at the same time. We’re all like, in our fifties, so I think the reaction is a little bit different at this age. But, yeah, it was really cool.”

Norman described the experience as “Stunning. I don’t know how many people will ever get a chance like this in life. To get to go back 29 years later and be in your same space with your same people? That just really doesn’t happen. It was crazy.”

“I kept saying, ‘This is a real brain f—.’ And it really just was. Everyone looks older, but we’re in that same room with the same kind of conversations happening.”

People teased, “Like any reunion, this one comes with a rehashing of some of the frank conversations — and arguments — about issues such as race that became a hallmark of the early days of the long-running series (33 seasons and counting).”

“We are still talking about the same things,” says Gardner. “While we were there, a Black Trans Lives Matter march went past the loft. To be next to Norman, who came out on television at a time when it was not cute, and Kevin, who had been about Black Lives Matter — it was powerful and crazy.”

Eric acknowledged the parallels between the social struggles from the original series and the homecoming. “There’s a bigger reason behind all of this, and it will unfold. And I have the same exact feeling that I did 29 years ago.”

Want to stay up-to-date with all the latest from the world of MTV reality?

Check out the Spill It Sister podcast so you don’t miss a thing. Here is the most recent episode.

Who was your favorite housemate from the OG Real World franchise? Drop names in the comments!