Alexis' portrayal of astrologer, Walter Mercado, was out of this world. 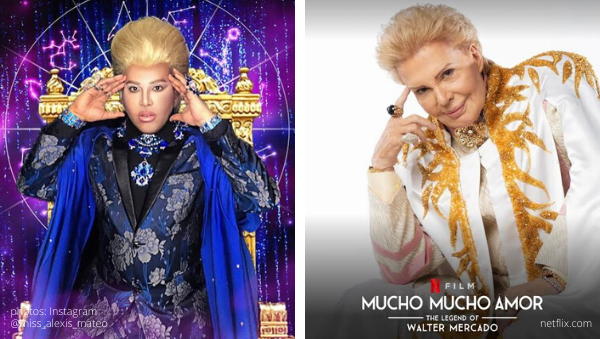 Producer of Mucho Mucho Amor, Alex Fumero, spoke with Variety regarding the timing of All Stars 5’s July 3rd episode and the Netflix documentary that premiered July 8th.

Was this a clever marketing tactic?

Apparently I wasn’t the only person who wondered if there was some master planning between the behind-the-scenes crews of Drag Race and Netflix based on the perfect timing of the programs’ premiere dates.

“Someone on Twitter said it was the most brilliant film promo we could have done,” producer Alex Fumero said. “I was like, ‘It would have been, had we thought of it.’”

Not even the film’s director saw this coming:

“There have been so many, many seasons of ‘RuPaul’s Drag Race,’ but for the Walter impression to come the Friday before our film comes out? That’s a little bit of a cosmic event,” co-director Cristina Constantini explained. “Even though we’re all kind of skeptics, it’s crazy. It’s crazy that he would do this at this time — he being Walter in the stars.”

Did Alexis predict what was coming for her next?

In a preview for July 10th’s episode, it is RuVealed that former dragtestent, India Ferrah, left notes for some of the remaining Queens. Blair St. Clair received words of encouragement and affection from Derrick Barry‘s nemesis, while Shea Coulee‘s letter was cryptic, with a side of shade.

“Shea, I’m so honored and blessed to have gotten to know you and work with you. You’re such an amazing person and kind spirit. I love you so much. Keep turning it. P.S.: I’ve got you.”

Jujubee hilariously did NOT get a note, but India’s fellow Las Vegas Queen, Alexis, did. After India’s attempt at an elimination scandal, Alexis wasn’t interested in reading what her former competitor had to say. “I got one, I think, but I don’t want to read it. It’s not important to me right now.”

The countdown is on until we can see how this saga plays out for ourselves!

Check out the Alright Mary podcast for weekly recaps of all things in the world of drag. Here is Colin and Johnny’s most recent hilarious episode!

I do weekly Instagram Live breakdowns of RPDRAS5 on my page, @onthisdayentertainment every Tuesday from 5-5:30pm PST. This week, I’ll be joined by Paul @realrealityhomo! Hope to see you there.

Which of the remaining top 5 do you think will make it to the finale? Drop names in the comments!