The pair went from 'friendly' to "genuinely affectionate" in the course of a week. 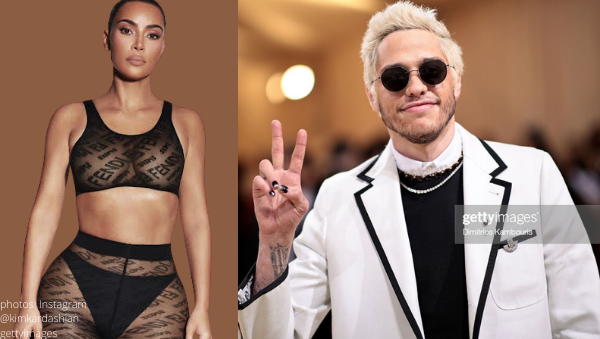 Are you Keeping Up With Kim Kardashian‘s latest romance?

The Keeping Up With The Kardashians alumni was spotted out with comedian Pete Davidson for the third time this week- this time at NYC‘s Zero Bond.

On Halloween weekend, Kim and Pete broke the internet after they were caught holding hands while riding a roller coaster at Knott’s Scary Farm with Kim’s big sister, Kourtney Kardashian, and her fiancé, Travis Barker.

According to reports from People, the SNL star and Skims founder “hang in the same circles so they will be together from time to time.”

One source assured the news outlet, “It’s just friends hanging out,” while another noted that Kim and Pete “have chemistry.”

Tuesday night, the Staten Island native arranged for a private rooftop diner date with the influencer at one of his hometown restaurants, Campania.

Sources told Page Six, Kim is “intrigued” by Pete and that “she likes him.”

The following evening, the popular pair were “smiling and laughing a lot and seemed genuinely affectionate with each other” at Zero Bond while celebrating Simon Huck‘s birthday with several friends.

“Wednesday night was a bit less dramatic, as restaurant sources described the evening as ‘casual.’

Another insider noted, ‘Kim and Pete were very low-key.’”

Audiences got their first state of this potential power couple when Kim hosted Saturday Night Live and the pair played Disney’s Aladdin and Jasmine in a now-viral clip.

Need help Keeping Up With The Kardashian/Jenners?

Check out Zachary Reality for the latest reality tv news and gossip.

Do you think Kim and Pete make a cute couple? Sound off in the comments?