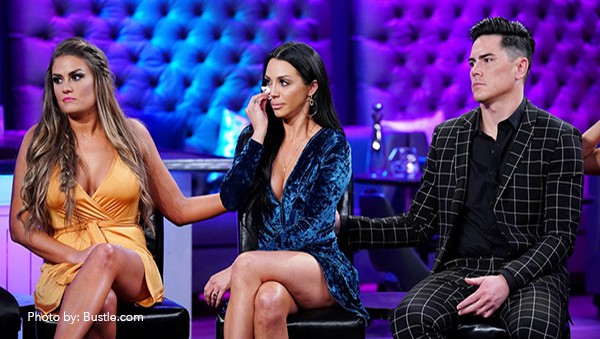 I graduated high school in 2001, and since then my class has had two reunions. Even though they see each other almost weekly, they had a 10-year reunion and then a five-year reunion. I was invited to neither, as I’m sure you can understand. I never knew what the appeal was until watching Vanderpump Rules. Everyone attends their reunion with one goal in mind: to get the dirt. It’s the precise reason why I attend the Vanderpump Rules reunions.

Rather than go through Andy Cohen’s interview question by question, I’m just going to catch you up on the dirt that was dished out. Let’s start with the couple we’ll never understand – Jax Taylor and Brittany Cartwright. They’re still together, but we all knew that thanks to Instagram. Andy begins with the cheating scandal: why did Jax do it? Well, it’s simple. He and Brittany were fighting and instead of dealing with their problems he decided to have sex with someone else to sabotage his relationship. What he can’t explain is why he had sex with Faith in front of a 95-year-old woman. My explanation is because he’s Jax. Brittany was completely blindsided – she believed they were doing just fine so when she heard about Faith it was a shock (not to us but we’re the viewers and we know everything). Tom Sandoval chimes in, telling Jax that he was the cause of one of the worst fights he and Ariana Madix had ever been in and letting him know that he was a huge dick throughout the Summer. Yeah, this all took place IN ONE SUMMER. Leave it to Tom Schwartz to come to the rescue. Andy can’t understand his “blind loyalty” to Jax but apparently, Jax helped him acclimate to L.A. and that’s all it takes to earn undying love there. Katie Maloney-Schwartz and Kristen Doute both chastise him for defending Jax, but it’s hard to do that when the girlfriend whose life he almost ruined is standing by his side. Which brings up a good question: after finding out about Jax and Faith and running off to Las Vegas, why did Brittany return home and begin sleeping with Jax again? Well, it was her way of reclaiming him. Shut up, we’ve all been there. Side note: Jax does say that he’s ready to be a dad and Stassi Schroeder believes he would step up and be a good father. #progress

Eventually, the conversation turns to the passing of Jax’s father. Regardless of how you feel about Jax, listening to him describe the sequence of events was heartbreaking. Brittany was there for him during his time of need and finally, FINALLY, Jax understands that he’s with an amazing woman and he should probably quit f**king it up. If they work out, every 50 Shades of Grey fan is going to think it can really happen. Great.

Next up is Stassi. You’ll be relieved to know that she is no longer with Patrick. Or you were relieved a long time ago because Instagram. I almost forgot about this because a summer in reality TV time is actually 76 years in normal time, but he wouldn’t talk to her when he was in Amsterdam and got p**sed when she didn’t call him microseconds after landing in Mexico. Nobody can understand why she was with Patrick, much less her. After watching the show she explains that she didn’t even recognize herself. I didn’t either. Manipulation Stassi annoyed me. Crying Stassi annoyed me. But this I-don’t-know-words Stassi was too much. I don’t know about you but I won’t miss Patrick or his stupid hair.  (Jax might because he and Patrick both know what it’s like to be called a ‘douche canoe’ and if that doesn’t make you best friends I don’t know what does.) While we were all confused about Patrick and Stassi, Ariana could sympathize. – she knows what it’s like to be with a guy who you have to tip-toe around to not upset.

That person, however, is not Sandoval, so I’m still confused as to why she was starting to distance herself from him. She explains the sex drought was caused by her feeling uncomfortable being touched and also they were busy. However, when Andy calls her beautiful she retreats and I just feel like, get over yourself Ariana you weigh as much as my right leg and butt cheek why don’t you try walking a day in my Target flip-flops? If you couldn’t tell, I don’t feel bad for her. I do feel bad for Sandoval. He’s trying to be the best boyfriend he can be as well as try to show everyone he’s an actual partner in a business. Lisa Vanderpump, however, wants everyone to know that he and Schwartz are micro-mini junior partners, at best. Other than his money, Sandoval feels he has more to offer than his special cocktails. But Lisa tries to keep him in his place, informing Andy (and us) that she hasn’t even cashed their checks yet so basically they should be grateful for their involvement thus far. I love Lisa but she was kind of a dick about the whole TomTom thing. Although, I will say that Schwartz seemed kind of relieved to not have as much responsibility as he thought he would have.

The Tom’s weren’t the only ones confused about their partnership. That’s right, it’s time to dig into Scheana Marie. Scheana was unaware of quite a few things this season. First, let’s talk about her relationship. So, it appears I wasn’t just “being a jerk”. Rob really didn’t like her. I was right! My jokes were all merit-based!  I actually think that makes me a jerk but I don’t care – after the way she discounted Shay and flaunted Rob like he was a king, well, that way she learns. She does tell us that she loved him for 12 years and he broke her heart and, no, I still don’t feel bad for her. Kristen reminds her that he didn’t even want to be on the show and then was a part of the whole thing until… 2 weeks after they wrapped. That’s when he broke up with her. Nope, I still don’t feel bad. Then she was upset that Lala Kent called her ‘tone deaf’. In Lala’s defense, she is. Now they’re not friends anymore and it’s because Scheana was too consumed with herself to call Lala and check in. Lala believes that once Scheana got the Vegas gig she tossed her friends aside, I kind of concur.

Scheana being oblivious and tone-deaf weren’t her only problems on the reunion. Jax called her out for not reaching out to him with a phone call when his dad passed, even after every other female (that he screwed over many a time) in his life did. (Although, he didn’t mention Kelsey. Interesting.) This throws Scheana over the edge and because she can’t be seen without her face, she heads straight for the makeup room for a touch-up. Ariana heads over to comfort her while Jax spews his “f$%@ you, Scheana” rhetoric without taking a breath. I’m not kidding, It was like a live version of Kanye West’s Twitter posts.

Other things that happened on the reunion were, Andy questioned James Kennedy about Logan. They’re just “friends.” And then Lala discussed not being friends with Scheana anymore because she could no longer take the Scheana show, to which Scheana replied “all you ever talk about is ‘your man this and your man that.’ The moral of this reunion is, we’re all over Scheana.

We still have two more reunion specials to go, what are you hoping to find out? Comment below!

Be the first to leave Comments for Vanderpump Rules Recap: The Reunion – Part 1