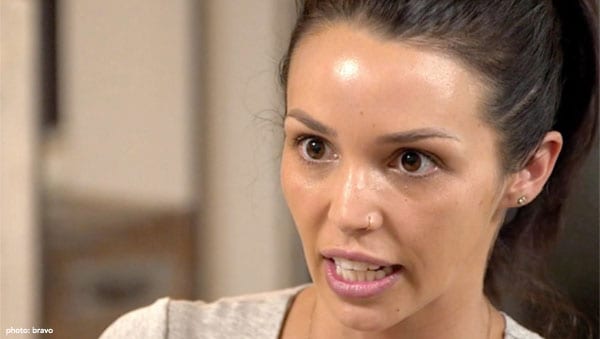 There are some questions that people spend their lives trying to find the answers to. People sell off their belongings to travel the world in the hopes they’ll find their purpose, discover the meaning of life, or, more importantly, reveal the existence of god. Is there a god? Even Morgan Freeman went in search of him and documented it. And little did everyone know that yes, there is, in fact, a god. And this whole time he’s been hiding in plain sight, on Vanderpump Rules, in the form of Rob Valletta.

Yes, it’s day two (I’m assuming) at the lord’s cabin and everyone is slowly coming out of their drunken stupors. While James Kennedy and Lala Kent are recovering from their drunk fight, Jax Taylor is bright-eyed and bushy-tailed and is ready to turn back his 37-year-old clock with a run – because now that he does Reike he’s a new man.

Anyway, new man Jax is in the middle of his work out when he gets a wild hair. “I think I’ll swim to the buoy and back.” I had no idea Reike had the ability to make you a better person AND swimmer. Well, that’s because it can’t. Halfway to the buoy (which I cannot tell you the distance, I’m not the Coast Guard), Jax starts to panic and cry out for help, prompting the need for the lifeguard. As he describes it his life flashed before his eyes, and ours because Bravo played just about every clip of him being horrible they could find. Listen, I’m no Rob but I think it might be time for Jax to be decent. While Jax recovers, Lala tells everyone what happened, and they all have a good laugh. As Tom Sandoval cooks, Jax walks in and announces that he almost died, to which no one responds. He goes into further detail but eases everyone’s mind by letting them know he did not need heart-to-heart. Thank Rob. Oh, and let me just say this: Jax spends most of his interviews making fun of Scheana Marie while not even realizing that in continuing to talk about his near-death experience, he’s pulling a Scheana. But I do have to admit, he does have some funny jokes about them.

Anywho, Lisa Vanderpump calls Sandoval about going to Vegas for Tom Tom business and the trip just so happens to be the weekend of his birthday. Obviously, Ariana Madix is thrilled. But in Sandoval’s defense, it is for business, as opposed to the Vegas trip he ditched Ariana’s birthday for in order to crush things with bulldozers. And because we can’t have a trip without at least 33% of the gang attending, Jax invites himself. Meanwhile, Lala goes topless and sunbathes. Look, there was water, sun, and no Katie Maloney-Schwartz, what else was she supposed to do. But I guess that only lasts mere moments because all of a sudden everyone is on the boat and headed to a spot where they can cliff five, except for Jax – he’s already cheated life once. His words, not mine. He does, however, partake in being pulled on the toob, resulting in the loss of his shorts. Now it’s Rob’s turn to show them how it’s done – he water ski’s. This surprises Jax as he thought Rob could walk on water, being God and all. Scheana thinks the act of water skiing makes Rob a real man.

Rob eventually takes them back to the cabin only to drop off the girls and take Sandoval and Jax back on the water to enjoy get-me-away-from-Scheana time. As they ride off, James explains how grateful he is that he’s with Raquel, as he’s on a water board with Lala. Don’t worry Raquel, you’re not the only one oblivious to your boyfriend’s feelings. While out on the water, Sandoval asks Rob about Scheana to which he responds with a story about him nearly marrying a princess, and how he doesn’t throw the word “love” around because he’s good at hurting people’s feelings. I don’t know how you go from a princess to Scheana, it’s like a Hallmark movie but instead of being happy for the regular girl you just hate everyone.

We’re at the end the trip and Scheana is preparing everyone for their job duties that are out of Rob’s cabin binder. Like the 10 commandments, if you will. Because it’s night time no one is interested. Jax is tired because he almost died, and James and Lala get in the hot tub. Sandoval and Ariana are back in their room and after speaking with Lisa, he finally invites her to Vegas. While in the hot tub Lala tells James about a conversation she had with Raquel that included concerns she had over Lala and James’ relationship, to which James responds “she has to deal with it.” Lala is not cool with it because it’s disrespectful to her man, and James doesn’t care because he believes she’s only with him for money. Then he says “Ray J hit it before Kanye”, and I laughed. (Shut up, you did too)

It’s finally departure day and Scheana wakes up and starts with the I love you’s, and Rob changes the subject. James flirts with Lala in front of Raquel, Scheana wakes everyone up to clean. Jax lets us know it’s not Scheana’s home, and then here we go with the I almost died bit. Once completely clean they all leave. Back at Scheana’s apartment, she’s happily unpacking while listening to her own song “Good as Gold.” No, really. Kristen pops in to deliver her birthday present – which, OK, 1) I didn’t even know they were friends and 2) her birthday was a good 11 episodes ago – and Scheana begins telling her about her divorce closet. Kristen then tells Scheana about the conversation she had with Jax, in which Jax announced that Rob, in fact, was not in love with Scheana. (OK, now I know why she stopped by) Thanks a lot, Kristen because for the next 12 days (or 2 minutes, time had lost all meaning at this point) Scheana went on and on about how in love they were, how he adored her, and how now she was going to mess with Jax. She said a lot more things out of fear I would develop a migraine trying to keep up, I didn’t type them.

Anyway, since just about everyone was at the cabin it’s almost easy to forget that other things happened.

Lisa informs Katie that she has to go to Vegas and she’ll be taking Sandoval and Tom Schwartz. And then somehow the topic turns to Billie getting a new vagina in Thailand and how great her orgasms are. Who knew? Later on, Katie and Schwartz ride their ad placement (scooters) to El Coyote for date night. They talk about how much better they’re doing and if you can believe it, Schwartz doesn’t drink! He talks about being excited about having more responsibility, and then we’re serenaded by mariachis.  Well done, Schwartz

Stasi Schroeder invited Lisa to be a guest on her podcast, with the ultimate goal of figuring out Lisa’s secret to getting a man to marry her in 3 months.  So I’m to assume the psychic did not help. To ensure a “profesh” interview she implores the help of Katie Maloney-Schwartz and businessman Tom Schwartz. They begin compiling questions and because he’s a businessman now, Schwartz contributes with “when did she lose her virginity”, and “what are her turn-ons?” Businessman indeed. She does end up putting together a good list of questions and heads to Villa Rosa to conduct her interview. Lisa has had 2 glasses of wine and isn’t sure what Stassi will ask her about – Goat cheese balls? Spray tans? Oh, Lisa. Aside from the poop question, it turned out to be a decent interview: basically, Lisa knows everything.

And through a discussion about how Lisa and Ken met and married, single gals everywhere were given some great advice.

To sum it up, everyone should be with someone who loves them as much as Scheana delusionally believes Rob loves her. And by the way, how has that not become a meme yet?  Do you agree Scheana might be slowly losing her mind? Comment below!