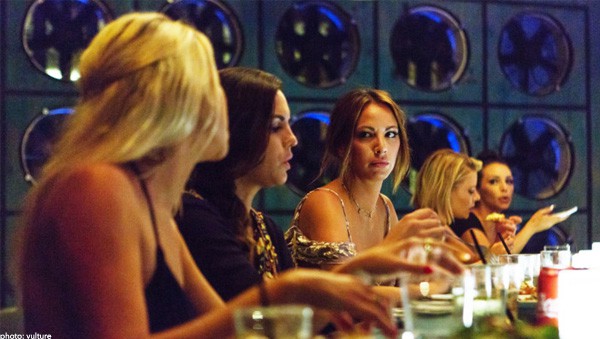 We’re living in difficult times. Things are very one-sided: you’re either here or you’re there. There is no gray. No middle ground. You have to pick a side. After tonight, you’re either #teamjameskennedy or #teamkristendoute. These are the options. Me? Well, I like to make my own options: I’m #teamasteroid. It’s the only logical way to end this nonsense.

It’s the day after the groups’ drunken debauchery at da club and Katie Maloney-Schwartz, Stassi Schroeder, and Kristen have awoken from their comas, reconvening at the beach. Stassi had the best night’s sleep ever, thanks to the help of a sleeping pill. Kristen is still a little exhausted, as she didn’t make it back to the room until 8:30 AM. Following this announcement Katie makes an announcement of her own: Schwartz told her Kristen and James “hooked up”. With that phrase we’re teleported back to the night before, and the early 2000’s.

As expected everyone is wasted. Equipped with liquid courage and a flash drive, James makes his way to the DJ booth and convinces the DJ to let him take over the 1’s and 2’s. Everyone appears to be enjoying themselves, including Krazy Kristen. In fact, she enjoyed herself so much that after his impromptu set, she drunkenly (or at least I hope she was drunk) gyrated on the floor while doing the splits. Imagine watching your mom drunk twerk, or the acting on the new Roseanne. Yeah, it was like that. After she performs her mating ritual she strikes up a flirtation with James, an action that weirds everyone out, including not me because it’s Kristen. After Jax Taylor steals a bottle of Vodka by shoving it down his pants they all head back to the hotel. I guess Kelsey doesn’t have stones that cure kleptomania.

The next day, also known as the world’s longest day as you’re about to discover, Jax wakes Brittany Cartwright up, partly to tell her how p**sed he is at Scheana Marie for trying to set up her and Adam, but mainly to make her get up so he can walk her through his detective work in the “did James and Kristen “do it”?” case. After everyone returned from the club, it appears as though James and Kristen hung out in Jax’s pool until the wee hours of the morning, and because there are two pillows by the pool, well, you don’t have to be Jax to figure out what happened. Brittany is so blown away by the work he’s put into this that she remarks, “if he’d put the same work into our relationship, we’d be fine.” In case you were wondering they’re still together.

Meanwhile, Tom Sandoval is preparing for his golf game with a shot and dressing in his most snazzy golf attire. He’s not a real golfer, he just plays one on TV, and not very well. The guys meet up to golf and, you’ll have to excuse me, I got drunk from the fumes radiating off of Tom Schwartz. Schwartz looks like a cumulative of the first time everyone in the entire world got drunk. Mine was Zima, Schwartz was making me have flashbacks. Anyway, James drives around on the golf course, wasted and having fun, UNTIL he stops for a minute and the guys (well Jax, Sandoval, and Peter because Schwartz was too dead to talk) confront him about the Kristen thing. They hung out kind of but not really, he says, which in reality TV speak interprets as “we did something, spread the rumor.” Of course, James loses it, reminding the guys that he’s dating the soon-to-be Miss USA (maybe she will be, you don’t know), and he would never cheat on her with Kristen. And then he cries. Being a DJ is tough.

While the boys are busy having feelings, Brittany and Scheana are getting a massage. They discuss Jax being upset about Scheana trying to set up Brittany and Adam, which makes Scheana happy because she enjoys Jax being so insecure. THEN they talk about Kristen and James, with Brittany detailing the detective work of Jax. Clearly, it must be true. Ariana Madix and Lala Kent join Scheana and Brittany and the rumor gains steam.

AAANNNDDD, we’re back. Back on the beach, back where we started before it appeared as though this day would never end. Katie brings up the rumor, and with the magic of editing, the reaction is different from the start of the episode: Kristen. Is. P**sed. Immediately she starts spazzing out. Like a robot on the fritz, she’s short-circuiting. She runs out of new things to say and begins repeating phrases of Kristen past: I’m going to knock someone out. (she never does, mind you) Stassi and Katie try to calm her down when right on cue the rest of the gang emerges. Kristen begins interrogating them and gets the rest of the story from Jax, a most reliable source. With Kristen and James being under fire, Schwartz feels it’s the perfect time to reveal that he was so intoxicated he ended up at another resort. At least he didn’t make out with random people, right? No, not right. Katie, rightfully so, gets upset and tells him he can’t drink the rest of the day. And then Sandoval pretend fires Schwartz from the business and Jax jokes that the bar is now just called Tom and that was funny. If the pretend marketing job doesn’t work out I think Jax could make a living throwing down these one-liners and then exiting stage left.

Later, everyone gets dressed and heads to dinner. Before making their way to dinner, James texts Kristen to try and debunk the rumor. How do you think that went? Aside from that, Sandoval had arranged for everyone to wear polyester short suits but because it’s uncomfortable, Jax and Schwartz opt out of the fashion show. In Schwartz’s defense, he was hungover and I’m pretty sure anything that could add to his dehydration would’ve killed him. Also, in Jax’s defense, I’m from a border town so I’m #teamjaxtaylor on this one. They make it to dinner and James describes Kristen as a Venus flytrap: pretend to be dead and then slowly get away from her. While James plays dead, the rest of the group plays zombie: staring at their phones, selfie-taking, and snap-chatting away. This bugs Stassi because she has nobody to play zombie with, as she and Patrick are fighting because she didn’t text him when she got to Mexico. But she can only think about herself for a minute because it’s time for the unnecessary toasts. Sandoval toasts Jax’s birthday and invites everyone to TomTom where he’ll be bartending. Then Kristen delivers a toast, calling out James for a comment he never made. From there it turns into a typical SURver dinner: they fight. The guys gang up on James, Kristen has words for him, and finally, just like anyone else would, James snaps and loses it on Kristen, to which she replies with throwing a drink in his face, consequently hitting Lala. Is it me, or did Kristen look like she believed she was a superhero for what she did? I’ve seen that look in Transformers before, it didn’t belong on Vanderpump Rules. Anyway, James and Lala leave with Stassi, who wasn’t around for any of this entire ordeal, trying to make them understand how wrong they are.

Assuming they’re not all locked up in a Mexican jail for being out of their minds, that’s pretty much their trip. While they were gone, Ken and Lisa Vanderpump adopted another dog. #goals

Lisa and Ken work at TomTom and somehow end up discussing Brittany and Jax, with Ken reminding her that she put up with his shenanigans, a statement Lisa tried to shut down quick. #lisadontplay

Lala gets flowers, prompting Scheana to explain that the reason she doesn’t get flowers from Rob is because she doesn’t like flowers, claiming they’re #basic. I think it’s because he #doesntlikeher. I know I don’t.

So then, knowing what you know, whose side are you on? Are you #teamjameskennedy, #teamkristendoute, or are you with me #teamasteroid? Comment below!

Be the first to leave Comments for Vanderpump Rules Recap: The Smoking Gun