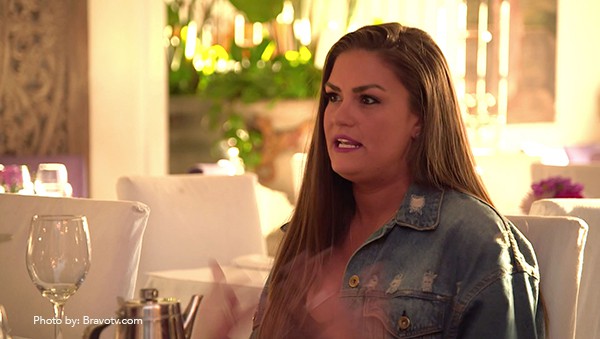 For the last two days, the weather in south Texas has been nothing short of amazing. No humidity, it hasn’t been cold, it hasn’t rained. We haven’t had a Spring, so having two days of nice weather is pretty rare these days. Just when I thought it couldn’t get any better, two amazing things happened on tonight’s Vanderpump Rules. Jax Taylor and Brittany Cartwright called it quits, and we went another episode without Scheana Marie recanting the pretend story of Rob Valetta mounting a television in seven minutes. Things are looking up.

Yes, Jax ended things with Brittany, citing he needed to make himself happy, which left us all wondering what he’s been doing this whole time if it wasn’t taking care of himself. Brittany leaves, and after eating pizza, Jax heads over to Tom Schwartz and Katie Maloney-Schwartz‘s apartment. He begins to tell them what happened, beginning with “I’m a pretty decent human being”, to which Katie responds with a Paul Rudd reaction (face tilted, eyes squinting, replying with “welllll”). He reinforces his “I’m a decent human being” argument with his retelling of the breakup story: he had sex with her the night before, things were going great so he decided to pull the plug. Now he’s ready to fix himself, proclaiming Brittany deserves better. At this point, we all deserve better than Jax.

In an attempt to not run into Brittany, Jax decides to stay at a hotel. While spending time with Jeremy, Billie, and his girlfriend Ariana Madix, Tom Sandoval receives a text from Schwartz detailing what happened with Jax and Brittany. Sandoval drops what he’s doing and decides to meet up with Schwartz and Jax at the hotel, leaving behind a p**sed Ariana who was already mad at the fact that Sandoval is more focused on his bartending gig at TomTom than he is on the book that I bet you all forgot about again. The Tom’s show up at the hotel and instead of consoling a drunk Jax, inform him that it was the right thing to do because he’s awful. Schwartz says their relationship had been terrible for about two months so it was time to pull the plug, forgetting that he and Katie were on the warpath for about four seasons.

Meanwhile, Brittany is visiting with friends. She’s staying at a hotel as well and I would like to know who’s watching her pups. Her first stop is at Kristen Doute‘s. A great first stop considering Carter hasn’t gotten over the Kristen with the broken foot and James Kennedy in a hot tub thing and they’re still talking about it, eventually resolving the matter with an offered blowjob from Kristen. So she’s aces when it comes to relationship advice. Anyway, Brittany arrives with her friend Zack who is also from Kentucky and currently living in LA. Brittany explains how everything was great with her and Jax and out of nowhere, he decided to end it. She’s disgusted with Jax, and the only way to fix that is to DM Adam, give him her number, and flirt with him. In her defense, we all hate Jax so it’s fine by us.

The next day happens to be Brittany’s first day back at work since Jax became reality world’s most hated man. Even though she has annoyed the F out of me by putting up with Jax, here’s why I dig Brittany: both Lisa Vanderpump and Stassi Schroeder (who was at SUR stealing candles for Lala Kent‘s performance) ask how she’s doing and why she didn’t take time off. You know why? Because the world keeps turning, that’s why. Also, I think that’s what the script called for, but mainly because Brittany isn’t going to let Jax stop her from living. We’re FINALLY getting somewhere. While Brittany keeps living by hanging out with Adam and friends, Jax heads to therapy. No, no, not that pretend one. He goes to REAL therapy. After spending the last couple of days apart, he’s been texting Brittany, telling her he loves her and how hard the breakup is for him and is now telling the therapist (the REAL therapist) that things aren’t working out the way he thought they would and he may have made a mistake. Did anyone else love how he said the relationship failing was about 90% his fault and not 100% his fault like it actually was? Anyway, while Jax cries to his therapist, Brittany hangs out with Scheana and Ariana, telling them about the text messages and ending the conversation with “thanks for the boob job, a**hole”. While Brittany is remaining strong, I’m with Schwartz on this one: at one point he said he had no sympathy for her if she went back to Jax and I’m with him.

Here’s what else happened on Vanderpump Rules – A Season Dedicated to Hating Jax: Lala is preparing for her first big performance. After teaming up with Stassi to plan the event, the big day has arrived and to say Lala is nervous is an understatement. While speaking to Lisa about the performance she gets emotional, to which Lisa responds by presenting her with a pair of boots that I’m sure cost more than my house and look like they were designed specifically for Lala. Lisa can’t be there but she’ll be there in spirit, in the form of her boots. For some reason, Lala now looks twice as scared as she did before she spoke with Lisa.

Stassi is preparing for Lala’s performance when she shows up with James. She spends her time rehearsing, taking a break to take a call from Lisa. Of course, Lisa asks if Lala’s boyfriend is going to be there, to which Lala responds with “he may or may not”, and this annoys James because he would totally be there if his girlfriend were doing big things, which I’m sure made Raquel feel great.

It’s the night of Lala’s performance at The Phoenix and everyone except Jax arrives because I uninvited him in my head. Brittany makes her rounds and people couldn’t be happier that she’s not with Jax, and I slowly began to lose my confidence that she would stay away from him in the long run. I believe her newfound happiness is called euphoria. Anyway, Lala arrives with her entourage and hits the stage. Of course, her performance is awesome. So awesome that Scheana gets jealous and wants to go back into the studio. I don’t know about you but I don’t think I can take listening to her squawk into a mic, hearing her repeat Rob’s name ad nauseam, in a voice so auto-tuned you’d think it was T-Pain. She almost ruined Lala’s performance for me. Fortunately, I snapped out of it and was able to enjoy the rest of the performance, one that included James. For what was shown, it was a good show. Well done, Lala. After the show, she pulls James aside and thanks him for giving her the confidence to sing in front of people; who knew that JAMES would be the winner of the season?

Sandoval and Ariana look at a house together, and while they agree on buying a house, listening to them answer questions on their plans for kids was pretty great. Sandoval wants about four, Ariana wants about zero, the realtor just wants to sell the house: a love story.

Other than imagining the number of kids Ariana would not like to have, Sandoval works on TomTom, and by that I mean him and Schwartz head to Witmore to pick out the uniforms that hopefully, Lisa will let Sandoval bartend in. They also talk about the Progress Party they’ll be throwing, a party Lisa isn’t thrilled about as she explained to Stassi. After telling Stassi about the party and expressing her annoyance, she asks Stassi how her and Patrick are doing. Not good, as we all know. He’s frustrating her and she no longer knows if she loves him. It’s like Stassi and Brittany switched bodies.

What do you think? Does Stassi need to take her own advice? Will Brittany stay away from Jax? Will we get one more episode without Scheana and her Rob stories? Comment below!

Be the first to leave Comments for Vanderpump Rules Recap: Lost Cause