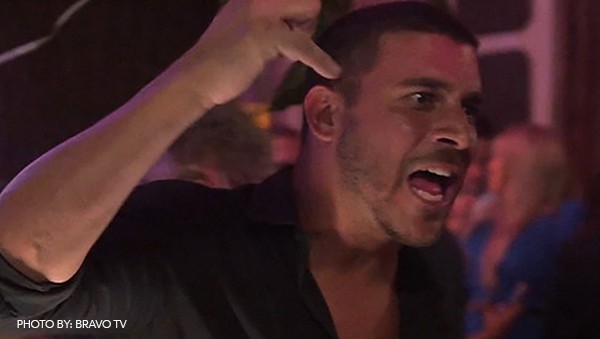 Look, after tonight’s episode I feel like it’s neither the time or place for a lengthy intro, so I’m just going to get straight to the point: I thought therapy and counseling were supposed to help you be less crazy? Kelsey may need to make up a new job after tonight.

Let’s start with Kristen Doute – we’re forced to relive her meltdown where she threw a drink on James Kennedy and lost her mind. As James and Lala Kent leave, Stassi Schroeder tries to talk to them and get them to understand that this was 100% James’ fault. If these people are anything to go by, Stassi would make a great therapist. Lala does not allow Stassi to get away with blaming James and reminds her that while she may not have been on the golf course when James didn’t say what everyone is claiming, neither was Stassi. While Lala lets Stassi have it (#teamlala), Tom Sandoval finds a crying James on the phone with Raquel, explaining what just happened. James gets off the phone, and Sandoval tries to get James to admit to something he didn’t say. Is anyone else ready for the reunion? Anyway, this ordeal obviously ends dinner so everyone retreats to the hotel. Jax Taylor and Brittany Cartwright are joined by Tom Schwartz, Scheana Marie, Ariana Madix and Sandoval to continue getting drunk. Jax sings a song about friendships. James joins Lala in her room and tells her he’s worried that Kristen is now going to come after him; Lala puts him at ease by letting him know she’ll set Kristen’s house on fire because she and James are gangster just like Dre and Eminem. Not Dre and Eminem now, I think she meant Dre and Eminem circa 1999. Katie Maloney-Schwartz and Kristen head back to Kristen and Stassi’s room, and Kristen is falling apart. It may have something to do with the Corona in her hand (and the 83 others she had earlier in the day). She can’t stop crying and finally, Katie (and America) can no longer take it and explains to Kristen that she was wrong for acting crazy and quit it. Kristen cannot understand why everyone is so upset with her. I mean, sure, she could’ve confronted James away from dinner, not thrown a drink on him and Lala, and not have ruined everyone’s night, but what kind of grown-up handles things reasonably? She can’t take it; she says she’s done and hides under the covers.

It’s finally go home day. Sandoval checks in with Lisa Vanderpump, who is at TomTom with Ken, and pitches her an idea: have a party at a building that has no walls and is just wood right now so everyone can see the progress. AKA, let me show off the new bar I’ll be bartending at. Lisa begrudgingly agrees Lisa then asks how the trip is going, to which Sandoval responds with the James and Kristen rumor.

While Sandoval is gossiping, Brittany heads over to Stassi’s room so she can do her make-up. Why? Because Jax needs to check in with Kelsey so he can update her on the trip. Kelsey asks if he’s taking time for himself, Jax lies about staying clear of drama and informs her he feels like he’s being attacked. Her solution includes a quick Nelson Mandela mention, which was great except that neither Jax nor Jason knows who he is.

They all make it home to LA. Kristen and her boyfriend, Carter, have lunch where she brings up the James debacle, not realizing that in trying to proclaim her innocence she incriminates herself by admitting hanging out with him until 7 AM. Carter gets p**sed and now wants to talk to Sandoval about the rumor. Kristen finally realizes she has zero credibility and maybe now we can go back to how it was at the beginning of the season where we hardly saw her.

Back at sur, Lisa arrives and talks to Lala. Lala’s lips are plump but she swears it’s because of a bottle cap trick and not fillers. I don’t follow her on Instagram so someone please confirm, and then send me the tutorial. Lala talks about yelling at Jax at dinner, then mentions the social media job in Florida that Jax is considering taking. This is the first Lisa has heard of this but let me tell you, the mere mention of Jax possibly leaving was like an early Christmas present for her. Meanwhile, James arrives at SUR ready to DJ. Raquel is with him and they discuss the Kristen rumor, with James continuing to claim nothing happened. I believe you so don’t make me look crazy, Eminem. Brittany and Jax head to work; during the car ride, Brittany asks him if he’s thought any more about the job. Jax says Kelsey told him not to think or talk about it for two weeks and I just find it fascinating that they’re going to hold this job for someone who has zero marketing experience and is barely proficient as a bartender. That was harsh but I don’t like him. Brittany wants him to put a lot of thought into it and then they talk about being broke and I love when they say things like that like we don’t know how this works. But I appreciate their effort in trying to make this believable. Then Jax brings up Adam, so this should be a good night.

While Brittany is on the car ride from hell, Stassi arrives at Katie’s apartment to work on a re-launch party for Katie’s blog Pucker and Pout. Katie asks if Stassi talked to Kristen and then they talk about how crazy she is. Then Stassi says something that is making me reconsider my #teamjameskennedy stance: Kristen is trying so hard to prove nothing happened that it’s just making it seem like something happened. Damn it, Stassi. I kind of thought that too but now you’ve gone and said it. Stassi wraps up her wisdom by explaining how she would kill her boyfriend if he pulled a Kristen and I hope she knows that all of these episodes can be used as evidence.

At SUR, Lisa is continuing to make her rounds and eventually ends up at Scheana. Scheana talks abou her and Rob getting married, even though she’s only been divorced for about 9 minutes. Then she talks about what they would name their daughter.  Finally, she talks about Jax and Brittany and brings the Adam thing up, bragging about her master plan. You know what? I hope Scheana and Jax end up together, wouldn’t that be the ultimate karma?

Anyway, during the night Jax confronts Adam about his crush on Brittany, which Adam denies and basically follows up with “it was all Scheana”. Jax continues on with how horrible Scheana is and that he’s mad at her and for some reason brings up how psycho she is about Rob. This is the point where his face begins to mutate so we’re about to see his Reike go right the hell out the window.

Jax tells Brittany about what Adam said about Scheana and he wants Brittany to confront her. Because Brittany is an adult, she says no. And now. It’s. On. While Jax is in the process of phasing, Ariana asks James about the pillows put around the hot tub. James continues to deny everything and says it’s just Jax’s way of taking the heat off of himself. Right then Jax confronts Scheana about Adam and we have to listen to Scheana’s “this is what you get for telling the world Rob doesn’t love me even though he said it on national television” explanation. Eventually, Katie shuts Jax up. Jax walks back inside and begins picking on James about the Kristen thing. Lisa and Ken walk into the fight, with Jax bringing in Sandoval for ammunition. When he doesn’t get the results he was hoping for, he retaliates by flipping everyone off, telling everyone to f*** off, then stands at the hostess podium flipping everyone off. A part of me felt like, I wish I would’ve had the balls to quit a couple of past jobs like that. The other part of me was like, dude, you’re 38. Once outside, Lisa tells him he’s acting like a baby and then tells him to leave. For some reason, he’s still p**sed about the James and Kristen rumor that he started and now Sandoval is trying to keep him calm. Of course, that doesn’t work. Jax breaks the fourth wall and takes off his mic and walks away, punching a pay phone, while not singing songs about friendships.

I don’t know about you but I’m about Jax’d out and wouldn’t mind a break. He should take a page out of Stassi’s book and call it a day for a season.

Do you think Lisa should fire Jax and retire him for a while? Also, do you agree that him and Scheana should end up together for all eternity as the ultimate punishment for being horrible? Comment below!

Be the first to leave Comments for Vanderpump Rules Recap: Karma’s a B***h