Time to break out the tux and ball gowns! 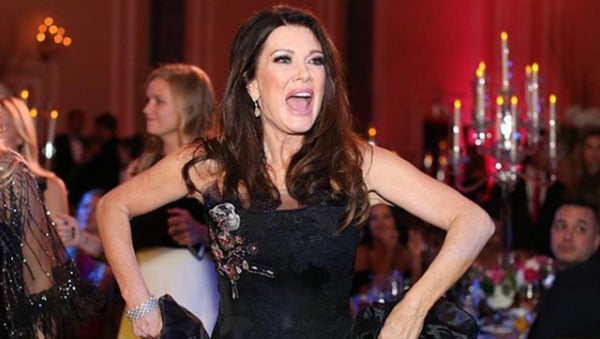 If anyone knows how to throw a proper gala, it’s pup-loving Real Housewife Lisa Vanderpump! The 2nd Annual Vanderpump Dogs Foundation Gala is a fundraiser to help #stopyulinforever, an advocacy initiative Lisa and Ken have championed the past few years.

Held at the Taglyan Cultural Complex, the decor was as opulent as one might expect and lit in none other than Lisa’s signature pink. Hosted by Mario Lopez, the event honored veteran Megan Leavey with the Dog Hero of the Year Award for the tremendous work with her military dog to save lives while deployed in Iraq. They also recognized Honey with the first ever Dog of the Year Award after having been rescued by the Foundation from the Yulin festival. Honey is now an ambassador for the cause.

Aside from the awards and entertainment, the guest list was a who’s who in the world of BRAVO! The event drew fellow Real Housewives from New Jersey, Melissa Gorga and Dolores Catania. Never ones to miss a charity event, Kameron Westcott and D’Andra Simmons represented Dallas. Former Beverly Hills Housewives Joyce Giraud and Taylor Armstrong, as well as newcomer Teddi Mellencamp represented the RHOBH cast mates (where was Kyle?!)! Always on the lookout for a photo-op, Gretchen Rossi represented OC. Mercedes Javid from Shas of Sunset also made a cameo. Of course, all the SURVERS gathered and played nicely to support their boss. Last but not least, the sex monster Giggy made an appearance and looked quite dapper BTW!

Take a gander at the glamorous event!

Still reeling from our @VanderpumpDogs Gala. What an incredibly meaningful and memorable night, where friends, family and activists came together with one goal- to create a better world for dogs. Thank you to our generous & supportive presenting sponsor @zapposforgood , and hosting sponsor @thisiscollide … and to all of our other sponsors who made the night a reality! @evolutionusa #DrinkPalmBay @surrules #MindyAndRandyLevine 💕🐾 📸 by @nikkiryanphotography

It was such an honor to have Megan Leavey, our Dog Hero of the Year, present at our @vanderpumpdogs gala! She is a true hero to this country, and the canine community, and we were thrilled to honor her service. And thank you former Mayor of West Hollywood and current Councilmember Lauren Meister for presenting her with this award! #ThankYou #VeteransDay #MeganLeavey 💕 @megok9

This past Thursday, I was the lucky recipient of the 2017 Dog Of The Year Award by the @vanderpumpdogs Foundation at the 2nd Annual Gala! I am so honored that I can't stop wagging my tail! Thank you to everyone who has been apart of my incredible journey, though it wasn't easy. True heroes are among us, and my story is a huge success thanks to @johnniesessa @lisavanderpump @pandoravt @vanderpumpdogs @laurencpresent @thompoint0 #HoneyFromYulin #YulinAmbassador #YulinSurvivor #StopYulinForever #Vanderpup #HeartSoFull #VanderPumpGala #Rescue #AdoptDontShop #DogOfTheYear

Housewives from across the country united to support Lisa Vanderpump! @vanderpumpdogs

Love what @lisavanderpump does for these beautiful animals. Held on to both of her gorgeous pups🐶❤️ @vanderpumpdogs

Enjoying ourselves at The @vanderpumpdogs Foundation Gala tonight. #stopyulinforever Thank you @johnblizz for all that you do on a daily basis and @lisavanderpump for bringing awareness to such an important cause and to helping save dogs around the world! 🐶💕🐶 @teddimellencamp @dandrasimmons #RHOD @bravotv

Love these photos taken by @nikkiryanphotography from the @lisavanderpump Lisa Vanderpump Dog Foundation Gala last Thursday night in Los Angeles. Thank you @johnblizz for including us. Love you to the moon and back! Loved being with @kameronwestcott and meeting Housewives from other franchises. So much fun for the beloved doggies! Makeup by Karl Pua of @muapua and hair by @beglammednow Dress by @jovanifashions and earrings from @shoptootsies. Skincare by @hardnightgoodmorning #prettyinpink #RHOD @ultimatelivingd Real Housewives of Dallas 💗🐶🐶💗👸🏻👸🏻🐝🐝🦄🦄

Thank you to all of our Veterans out there 🙏🏻🙌🏻 I salute and honor you all and appreciate your sacrifice for our country. This is Megan Leavey @megok9 who we celebrated and met the other night @lisavanderpump’s event for @vanderpumpdogs. They made a movie about her true life story of being a young Marine corporal whose unique discipline and bond with a military combat dog saved many lives during her deployment in Iraq. So a big thank you to her and all the men and women (and of course our four legged friends) who serve our country with such bravery and courage! #VeteransDay

The one moment captured where we made a deal to play nice. #pumprules

Not only is it an honor to know @lisavanderpump and Ken but its an honor to be a part of an event that is so much bigger, these two amazing people have the biggest hearts especially when it comes to animals. If you haven't seen or heard about @vanderpumppets @vanderpumpdogs please check it out and see all the work they are doing to help these lovable animals. And if you can please donate to end the cruelty to our furry friends #stopyulin2015 #stopyulinforever #stopyulin @evolutionusa #pumprules @bravotv also on a side note thanks to the boys @suitfellas and @giovannitestiofficial for my amazing suit, you guys do great work. 🐶💎🐕🐾

Beautiful evening for an important cause. Raising awareness for proper treatment, rescue, adoption #vanderpumpdogs #SaveYulindogs #pump #shahs #bravo Grateful to be part of it 🙏

With my Daddy at the @VanderpumpDogs Gala on Thursday! So proud of everything we have accomplished and so thankful for all the help from everyone who attended or contributed!!! And thank you to all of the companies who contributed to our Auctions!!! 📸 by @nikkiryanphotography 💕🐾

Who do you think slayed their gala gowns?

Be the first to leave Comments for Vanderpump Dogs Gala Brings Out The Bravolebrities!