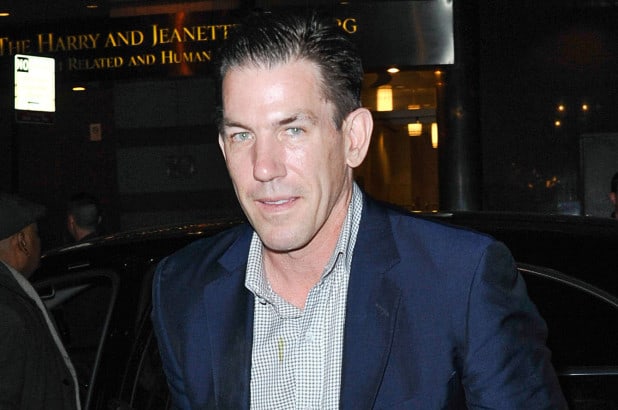 In a story that is both infuriating and shocking, Southern Charms’ Thomas Ravenel has been accused of sexual assault. According to a blogpost written by the victim’s daughter, Thomas also paid the victim $200,000 to keep the story quiet.

“We lived in Mount Pleasant, South Carolina. He was going to pick her up and they were going to go out for drinks. She agreed to that,” she tells the magazine.

But according to Ashley, something seemed off when Thomas came to pick up her mother. “I helped her get ready,” she says. “She wore a diamond tennis bracelet on her wrist. Her wrist was fine when she left the house. He left her voicemail saying he got lost on the way to pick her up. I thought he sounded a little inebriated.”

Things then seemed to get weirder. “She gets in the car with him and he changed plans. My mom was in real estate so he says, ‘Let me show my new house that just got renovated.”

Thomas and Debbie then go to Thomas’ new renovated home that he shares with children Kensie, 4, and Saint, 2 1/2. Ashley says that Thomas poured Debbie a glass of wine and gave her a tour, but things went from strange to scary once they got to the nanny’s room.

Thomas points out the window through the nanny’s blinds and make a strange remark about ex-girlfriend, Kathryn. “Do you see that?” he tells Debbie. “That’s where I caught Kathryn making out with some guy.”

That’s when things start to get physical. Ashley tells People that, “That’s when he turned on her. He pushes my mom onto the nanny’s bed, grabs her wrist with one hand, then he starts trying to pull her pants off. And she’s like ‘No, no, no, stop.’ He stuck his fingers inside of her vagina as well as her anus. She told me that he held her hands back with one arm and then pulled his penis out and shoved it in her face.”

“My mom is very claustrophobic – she screamed at him and said, ‘You’re a rapist.’ He stopped, jumped off of her and was like ‘out of his trance,’ Ashley adds.

Thomas then tells Debbie to get herself an Uber and leave, but Debbie had never used the app before and insisted that he drive her home. During the car ride, things are awkward and Thomas tries to reprimand Debbie for allowing him to drive while intoxicated. He also tells Debbie that he only wanted to “F*** her” and that she was too old and not really his type.

When Debbie returned home to her daughter Ashley noticed that she seemed removed and downhearted. Debbie showed her daughter her wrist, which was covered with red marks and then next morning, “her wrists were starting to look bad.”

Encouraged by a friend who is a lawyer, Ashley and her mother met with famed attorney Gloira Allred, who helped them participate in mediation with Thomas and his lawyer in June of 2016. In exchange for her silence, Debbie settled for $200,000. But unfortunately for Thomas, Ashley was present in video conference call that they had used to mediate and while her mother signed a non-disclosure agreement, Ashley was not asked to sign an NDA.

People spoke with Ravenel’s lawyer, Richard P. Terbrusch, who made it clear that the two were trying to paint this as a money grab “My client enjoys a certain degree of fame and unfortunately has become – unfairly – a target for an individual who has, in my opinion, dubious motivations.”

But Ashley insists that this incident has left lasting emotional scars that caused her mother to leave the state. Even leaving Charleston, her home of 20 years, to move somewhere she felt safer in Florida.

Because her mother can’t speak for herself, Ashley has become the voice of her mother’s pain and suffering. “This is bigger than my mom,” she says. “This is bigger than me. I would like to let… other women know that Thomas is not invincible. Or even just women who are against powerful men and think they can’t do anything. I want them to know, you can. I would like to see him off of Bravo.”

“I would like for my mom not to have to worry about flipping on the television and seeing his smug mug, flaunting his lifestyle around. It’s bigger than us now. I’d like to see some good come out of the ugly.”

Tell us if you’re shocked by the news of Thomas’ assault in the comments.