The RHOA Spice Up Spain! 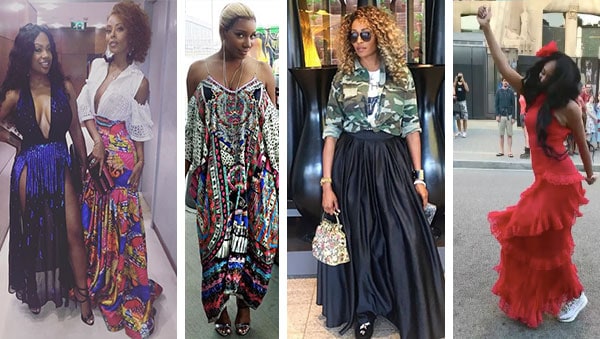 The Real Housewives of Atlanta Peaches left the South behind for shenanigans in Spain! The Season 10 cast trip kicked off in September just before the November premier so keep an eye out for their European fiesta!

From the looks of it, the ladies got up close and personal with Barcelona during that whole Catalan Independence thing – it will be interesting to see if any of the riots make the show or if they were too busy brawling themselves.  Only six ladies made the trip, including Nene Leakes, Kandi Burruss, Cynthia Bailey, Marlo Hampton, Porsha Williams, and rumored newcomer, Eva Marcille which leaves us wondering what happened to Kim, Sheree and Kenya who is speculated to have quit RHOA!

Of course, it wouldn’t be a RHOA trip without drama, Porsha reportedly was sent home not long after the beginning of the trip after trying to start a fight with Marlo! Ay caramba!

Aside from the drama, the ladies were quick to show off their jet-setter style on the historic streets of beautiful Barcelona. Check out the RHOA cast trip pics below!

Enjoying the scene on vacay! I had to be comfortable with all the walking around the city. Top & pants from @tagsboutique TagsAtl.com

Last day of the trip! All smiles 😁 shirt dress & shoes from @tagsboutique. TagsAtl.com. Thanks @evamarcille for the 📸!

Last night's vibes… I was kinda feeling myself in this @asos dress. Then I didn't even go anywhere! All dressed up with nowhere to go. Swipe left for more pics! Styled by @hauseofglam

“You’re responsible for being honest, not for someone else’s reaction to your honesty.“ #vacaywasamazing #unbothered #stressfree

I guess I better get my ass up🙄✈️

I must say I'm completely obsessed with @ottdubai 🌻

We did not come to play😜

I'M SHOOK! Did Jesus fix it for our girls in BARCELONA? 👀 #LikeOldTimes #RHOA

A post shared by The Real Housewives of Atlanta (@therealhousewivesofatlanta) on Sep 29, 2017 at 6:43pm PDT

We are LIVING for "EVA the DIVA" in this group already sis! 😩😂 #RHOA

A post shared by The Real Housewives of Atlanta (@therealhousewivesofatlanta) on Sep 30, 2017 at 12:08pm PDT

The ladies SPOTTED filming in Barcelona today! 👏🏾🎥 #RHOA via: @alitebeat82

A post shared by The Real Housewives of Atlanta (@therealhousewivesofatlanta) on Sep 30, 2017 at 11:30am PDT

A post shared by The Real Housewives of Atlanta (@therealhousewivesofatlanta) on Sep 30, 2017 at 3:44pm PDT

The ladies SPOTTED out and about in Barcelona after Porsha's departure! 👀 #RHOA

A post shared by The Real Housewives of Atlanta (@therealhousewivesofatlanta) on Oct 2, 2017 at 1:59pm PDT

Be the first to leave Comments for The RHOA Spice Up Spain!