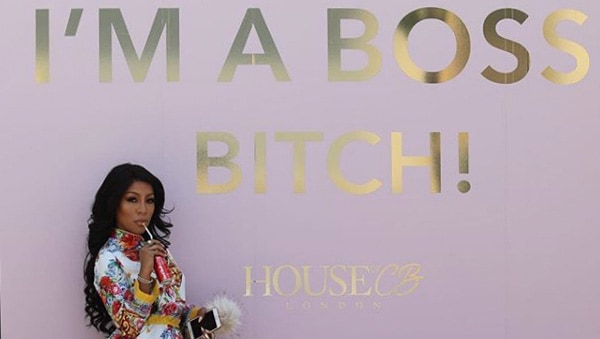 Love & Hip Hop is not just about the relationship drama, it’s also about watching women work to get their careers poppin’!  Aside from the music industry, for these leading ladies it’s all about building their brand as a businesswoman and bringing their visions to life. These LHH stars are making money moves to create and launch products and places where fans can come out in force.

Check out the CEOS that have come up since being on the show!

When Reminisce Mackie AKA Remy Ma first appeared in Love & Hip Hop season 6, she was fresh out of prison and putting her life back on track. Since then, she’s had the biggest come back in her music career with hit records like All The Way Up, reigniting a headline-making feud with Nicki Minaj with the release of diss track Shether and winning BET’s Best Female Hip Hop Artist. In addition to reclaiming her MC throne, she recently opened the doors to a women’s boutique Conceited in North Carolina.

As the longest-running female cast members on LHHNY, Yandy Smith is always doing THE MOST to hustle for the bag each season! The mompreneur runs an artist management company EGL Entertainment, launched a mom and children’s online boutique SmittenByYS and beauty brands Yelle Beauty and Yelle Skincare. In addition to running these businesses, she recently published a children’s book titled My Blended Family inspired by her own blended family with husband and LHHNY costar, Mendeecees Harris.

In early seasons of Love & Hip Hop Atlanta, Rasheeda Frost hustled to start an online store shipping packages out of her garage. In LHHATL season 4, her passion for fashion finally lead to opening Pressed Boutique in Atlanta. For Boss Chick Rasheeda, the women’s boutique has since been the backdrop of plenty of family drama on the show! It’s also a destination for fans and celebrity friends to pop in and shop. They can also buy her cosmetics line Poiz.  The boss beauty also models looks on the Gram everywhere she goes! Rasheeda’s store has been so successful she’ll soon be opening a second location in Houston.

In addition to LHHATL, Karlie Redd has a radio show, stars in Saints & Sinners and like Rasheeda in season 4 opened Merci Boutique. The fashionista later expanded her empire by opening a second store Mansiion in LA, however, it never took off. So, she went back to Atlanta and moved Merci to a new location and business is booming! She’s also launched a signature fitness line that sells online and in-store at Merci.

2017 has been a big year for the ever prolific LHHATL star K.Michelle! She’s just released her fourth studio album Kimberly: The People I Used to Know and, earlier in the year, finally opened her dream restaurant Puff & Petals in Atlanta. Of course, they serve cocktails with K’s signature Jack Daniels Southern Peach whiskey! Puff & Petals has been so well received, she’s added to the space and is working on expanding to more locations!

Clap back queen of Love & Hip Hop Hollywood Masika Kalysha recently launched her own beauty brand Khari Barbie Beauty. Inspired by her daughter Khari, the beauty line is all vegan, cruelty-free and paraban-free. Initially launching with lipsticks, she’s since expanded the line to include hair oils and more to come soon!

Coming from a family that owns and manages famous LA and Vegas strip clubs, it only makes sense that Nikki Mudarris would create the Nude By Nikki line!  The socialite’s brand initially started with lacy lingerie, expanded into a cotton sports-inspired collection and season 4 of LHHH brought the launch of lip gloss.

Have you tried any of these products or been to these places? Tell us in the comments below!

Be the first to leave Comments for The She.E.O.s of Love & Hip Hop!