This is NOT the mother of two's first run-in with the law. 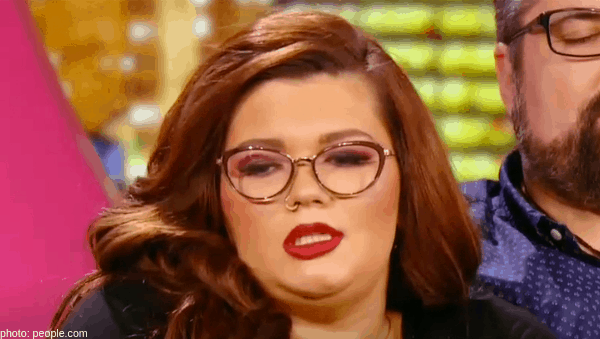 TMZ reported, “She was arrested in Indianapolis Friday just before 6:00 AM. Cops are not saying who the alleged victim is … per protocol. Portwood was still in custody at the time of this post.”via GIPHY
“She’s not done with processing,” a clerk at the Initial Hearting Court in Indianapolis told Radar Online. “She’s at intake right now.”
Popculture.com stated The 29-year-old MTV star and boyfriend, Andrew Glennon, had just announced that they were expecting another child, also teasing marriage. “Portwood already has two kids, son James with Glennon and Leah, 10, whose father is ex-boyfriend Gary Shirley.”Amber alerted (so lame- sorry!) audiences that she has been diagnosed with bipolar disorder and borderline personality disorder on a 2017 episode of Teen Mom OG, per People.com.

TMZ reminded me that the former 16 and Pregnant star went to prison for almost a year and a half in 2012 after violating her probation regarding a drug possession case. Never forget – Amber had a choice of prison vs. rehab and she chose prison. #ThugLife.

What do you think would be the best option for Amber’s kids while she’s ‘at camp,’ as RHONJ’s Teresa Giudice so eloquently said? Drop your opinions off in the comments!