Catelynn Lowell was not shy to announce she doesn't want Farrah Abraham to return to the hit show. 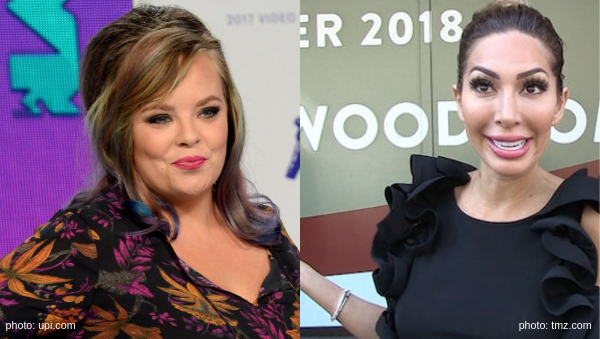 There is Teen Mama Drama with OG Teen Mom cast members Catelynn Lowell and Farrah Abraham. Catelynn did not hold back her feelings when she spoke about the possibility of Farrah returning to MTV’s hit reality show.

It all started when Farrah said she thought Cheyenne Floyd should be fired so she can return to Teen Mom. “No one knows who Cheyenne is on the show, let’s be real,” Farrah said in an exclusive interview with US Weekly. “That is a joke. … You can’t get someone from the Challenge show where they purposely hook up for the sake of ratings, which happens nonstop. You’re duping what Teen Mom is about now. You make Teen Mom out to be a lie. Cheyenne and her boyfriend [Matt Walker] are super fans of Teen Mom. You can’t put super fans on TV shows and think it’s authentic.”

That’s when Catelynn got in the mix. “We love Cheyenne and she’s a better fit than Farrah was,” per Catelynn to US Weekly. “She’s [a] respectful, loving and caring person, and finally all of us girls can sit on a couch, go out and just have fun with one another. We wouldn’t want it any other way.”

In regards to the Teen Mom turned adult film star, Catelynn explained, “She [Farrah] hasn’t changed as a person. She even said she would only come back if things were her way,” Catelynn continued. “She’s still the self-righteous person — she always has been — and we don’t need that type of attitude in our loving group.”

Would you like to see Farrah return to Teen Mom? Sound off in the comments!

Be the first to leave Comments for Teen Mama Drama