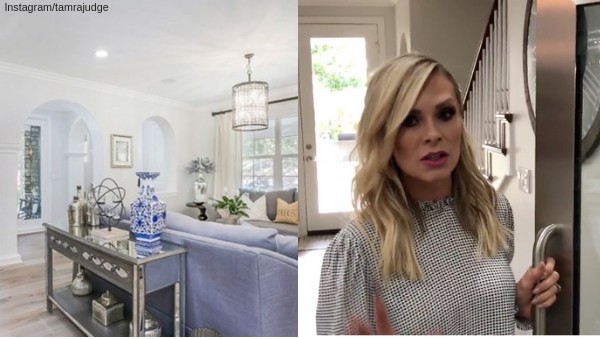 After a turbulent year, it looks like Real Housewives of Orange County’s  Tamra Judge and her husband Eddie have put her $1.799 million mansion back on the market.

The couple moved into the 4,000-square-foot, five bedroom, five bath, in December 2017.  But on September 13th, Tamra confirmed on her Instagram  that the rumors were true: she and Eddie were moving house.

The fitness guru admitted that she loved “the process of remodeling & decorating,” but the house just wasn’t right. “I can’t wait for you you to see what’s next,” she added. “We are very excited about the next chapter of our life…. stay tuned”

Yes, This is happening 😱 After a very emotional year we have decided to make a change. I love the process of remodeling & decorating and enjoyed ever step of the way. I can’t wait for you you to see what’s next . We are very excited about the next chapter of our life…. stay tuned #godisgood🙏. * I LOVE THE “SPECULATIONS” OF WHY WE ARE MOVING 😂. KEEP THEM COMING SO YOU CAN FEEL LIKE A REAL ASS WHEN YOU FIND OUT 💀

Earlier this year Tamra spoke with Bravo’s blog Most Wanted, where she shared that things have been rough-going in the house since the day they moved in.

“Since we moved in, it’s just been one thing after another. We moved in under construction, which was stressful. Then, our dog got cancer. Then, our guinea pig died. Then, I broke my foot the same day the guinea pig died. Eddie also underwent the first of many heart procedures as soon as they moved into the home,” she told them.

“[I loved] the backyard and when we bought the house Eddie goes, ‘I don’t have a good feeling about this house.’ He told me that,” she explained.

“And I’m like ‘Really?’ He’s like, ‘I don’t have a good feeling.’ And he’s like, ‘If you want it. I go, ‘The backyard’s beautiful.’ .. we got the house and red[id] it and in the process, water leaks happen. The day before he went into the hospital, he tried to put the TV on the wall and hit a fire sprinkler and flooded the whole house after we had just done a lot of construction. So it’s just been one thing after another. I don’t think the house likes us. The house is going on the market… It’s a beautiful house. I think the house doesn’t like us. Not a good fit, so we might be moving.”

But apparently, not everyone is buying Tamra’s story. At the end of her Instagram post, Tamra addressed the rumors that there were other reasons why the couple decided to pack up and go. “I love the ‘speculations’ of why we are moving 😂,” Tamra wrote. “Keep them coming so you can feel like a real ass when you find out. 💀”

Well whatever the reason, Tamra’s house sure was beautiful while she had it.

Would you buy Tamra’s house? Sound off in the comments!