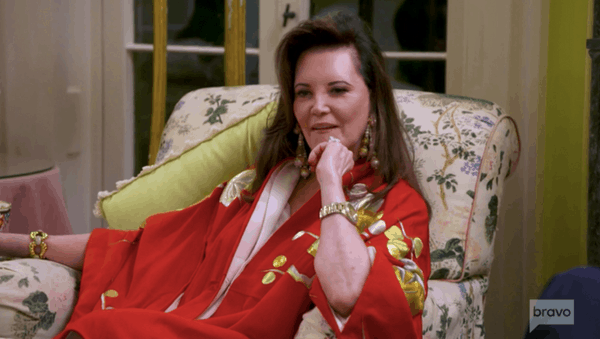 Do we all hate the old south yet? This episode was disappointing for many reasons, none less important than Patricia Altschul once again pushing her antiquated views onto the rest of the Southern Charmers. But we’ll get to her annual “men only” dinner in a second. First let’s discuss what exactly was going on with Austen Kroll and Victoria.

I admit that I have been an Austen and Chelsea Meissner stan since the beginning of this season. They just look so good together! Last week Austen fumbled the ball hard when it came to defending Chelsea’s honor to Shep Rose. Although you wouldn’t know that he’s suffered because of it. In this episode, Austen runs back to Victoria with his tail between his legs. He tells Craig Conover after the two go on a run, that Victoria texted him to come over after the Nico party.

Austen uses Victoria as a crutch every time that he gets rejected by Chelsea, and the dinner that the two have at Red Drum restaurant to DTR (or define the relationship) is awkward. For some reason, Victoria has fallen into the trap of thinking she can change a man who is, say it with me now, just not that into you. I physically cringed when I heard her tell Austen that, “I just want you  and only you,” and how she agreed to let Austen and Chelsea hang out without her! I’m not saying that she should have been possessive, but do not let your new boyfriend hang out with the girl he has left you for in the past! Honestly, this girl is too pretty for Austen. She needs to run away as fast as her feet can take her.

Over in another doomed relationship, Thomas Ravenel and Kathryn Dennis might be giving things another shot. Last week we saw Thomas shamelessly flirt with Kathryn in front of Ashley’s face. And at Exemplar Fitness, Kathryn even admits to Chelsea that things are not totally finished between the two of them. Besides my obvious misgivings about Kathryn getting back together with Thomas, I do think that Thomas was trying manipulate Kathryn when he told her that their 3-year-old said to him, “That’s my mom. Why aren’t you with her?” 1) There is no way that that baby would say that and 2) Don’t use your children to trap your ex!

Thomas clearly still has feelings for Kathryn. At the dinner that he has with Shep Rose and Whitney Sulder-Smith at 5 Church, he even admits that the two still sleep together from time to time and that he felt like they didn’t have a real chance because things got so heated, so quickly. He asks Kathryn if she wishes that they could get back together and Kathryn (you’re doing amazing, sweetie!) tells him no, she just wishes that they could be friends and co-parent.

Which brings me to the question of what in the hell was Patricia trying to do with Ashley’s look? The two meet at Gwynn’s to give Ashley a “southern bell” make-over. But EVERY outfit that Pat made her try on is ugly as sin and made for a woman in her ’70s. These out fits are atrocious and in truth, Ashley dresses no worse than the other women on Southern Charm.  I honestly believe that Patricia picked out outfits that would make Ashley look ugly because Pat hates other women and can’t stand to have attention drawn away from herself. Just look at the “men only” dinner she threw at her house.

Patricia throws a dinner where she invites only the guys and then continues to tell them all that women have ruined the institution of marriage by having premarital sex. Then she says that “in my day” women who were single at 30 were spinsters and that women are doing themselves no favors by pretending to be a man’s wife without a commitment. Was this all just a ploy to get Thomas to commit to Ashely? Thomas tries to tell an anecdote about something he said to Ashley, but accidentally calls her Kathryn instead and the rest of the guys smile knowingly at each other. Sorry Pat, but until Thomas can get over his infatuation with Kathryn, he and Ashley are going nowhere.

What do you think of Patricia’s “Men Only” Dinner?!

Be the first to leave Comments for Southern Charm Recap: Kat’s Got Your Tongue