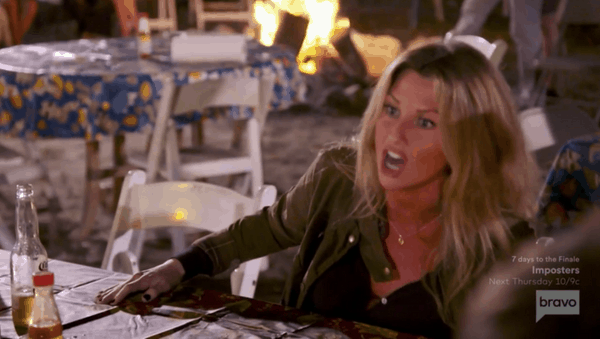 The episode picks up from the middle of the attack Ashley had made on Kathryn Dennis in the last episode. The only point I can make in Ashley’s favor is that I really believe she was buzzed at this point of the night and was feeling sensitive after not exactly fitting in with the ladies. But as we’ve seen previously this week with another celebrity (AHEM), being under the influence does not excuse *sshole behavior. The jealous and angry words that Ashley lashed at Kathryn were what truly lies in her heart. She has probably seen herself quietly slipping into the role of Thomas‘ dutiful wife and mother to his two children and Kathryn has always stood in the way of her vision.

High on delusions of her own power, Ashley goes straight for Kathryn’s jugular, saying that Kathryn never sees her kids, that she didn’t go to the hospital when her son was sick, and that the nanny told her all sorts of truth about what Kathryn is really like as a mother. As much as Ashley assures Thomas that she TRIED to appease Kathryn, let’s not kid ourselves. She has hated Kathryn since the minute she arrived on the scene and all she wants is validation that she is the perfect woman for Thomas and for everyone to agree that she is so much better for him than Kathryn is. (Although, we all know that no woman is safe with that abusive monster.)

But there is one flaw in your plan, Ashley. In this case, we’re rooting for the birth mom.

When Chelsea Meissner addresses Ashley in the entryway of the house that they are staying in at Hilton Head, Ashley tells her that “just because you gave birth, it doesn’t make you a mother.” And she’s right. There are plenty of people who are biological parents who are either physically, financially, or emotionally unable to raise a child in a stable and loving home. And yet, we don’t root AGAINST the biological parents. Especially when that person has made very public strides to get their life on the right path. It’s not a guarantee that Kathryn will be a good mom, but we are hoping that she will be.  And really, this fight is not about Kensie and Saint. This is not about motherhood writ large. This is about Thomas, and Ashley’s jealousy that Kathryn is the significant person in his life that she has yet to become.

As I’ve said many times when recapping this show, the problem is that Thomas does not step in and put Ashley in her place and tonight was no exception. All he needed to do was firmly tell her that she can’t go to the party, not this year, not until Kathryn felt comfortable with their relationship. There will always be other holidays and events where Ashley can be invited in the future, but for the first party that Kathryn and Thomas were going to host together, Ashley just needed to send a gift and go off and get her nails done for an hour.

The problem is also that Ashley doesn’t respect Kathryn, which is not only evident by the fact that she literally tells her “I don’t respect you,” but also by the fact that she continues to push the issue. Even after Kathryn has told her that she doesn’t want to discuss the party that night nor in front of her friends, and especially considering how Kathryn is a class frickin’ act and does not engage at all with Ashley as she flips her bangs out of her face and digs down deep to spew some pretty hateful stuff at her. Whitney Sulder-Smith is the only guy at the table ( the only guy in the restaurant) willing to sit with the women and try to get Ashley to back down, the rest are hiding behind their beer glasses.

Thomas finally comes over and gets Ashley the hell out of there and the rest of the cast seems stunned to say the least. Because Ashley and Thomas have  to take the ferry back to Hilton Head with the rest of the crew, they eventually return to the restaurant, but eat inside, away from the others. Shep Rose tries to come in and mediate, but Ashley shuts him down and tells him that she doesn’t like Kathryn.

Once the group gets on the ferry things go from tense and awkward to hostile. Chelsea makes the stray comment that if Kathryn is uncomfortable with Ashley staying in the house with them that night, then she shouldn’t go back with them. Ashley, who NEEDS to prove that she is the victim in this case, turns to Thomas and essentially says, SEE what they do to ME! And Thomas, who is an arrogant fool, turns to Chelsea and screams at her that she needs to apologize. He is trash. He is trash. He is trash. Honestly, what kind of southern gentleman hollers at a friend, no less a woman, in public? The kind that felt so small as a man and so helpless to make a decision to stick up for either his girlfriend or the mother of his kids, that he finds an easy victory screaming at a less intimidating victim. Bravo, fire this guy.

Anyway, the rest of the night dissolves into absolute chaos. Ashley is drunk and will not let the conversation end, nor will she just go to bed. (The vibe is very RHONY’s Scary Island) The next day, the group splits into two, with one half going crabbing and the other going fishing. But more tellingly, Ashley and Thomas are still at the house, and when they come down to breakfast Ashley decides to ignore the fight she had the night before and act like nothing happened.

Ashley and Thomas go with neither group, but instead spend the day alone back at the house. When the group meets up that night for dinner things are awkward and everyone is dancing around Ashley’s presence. Shep sits down with Ashley and Thomas in another attempt to break the ice, but Ashley is on a bizarre power trip, asking Thomas, Whose the boss? I am. Thomas looks visibly uncomfortable and Shep looks like he was slapped in the face with the fish he pretended to catch for dinner. Probably thinking that whatever is going on between these two, he wants no part of it, Shep gets up to leave Thomas and Ashley alone. But Ashley takes it as an insult and barks at him, “nice talk.” Then she asks him to make her a drink, knowing that Shep does not do public confrontation. She wants everyman in the room to feel like her b**ch, especially if they seem sympathetic to Kathryn. So Shep gtfo of there and flops down with the rest of the women who are sitting on a couch outside.

“I hate her,” he tells them. Which is HUGE statement, given that Shep tries to be nice to everyone (but not Craig).

The episode ends on another awkward note, when Austen Kroll gets a phonecall from his girlfriend of the moment, Victoria, who is upset that a picture was posted on Snapchat that looked like Austen and Chelsea canoodling. He does the very stupid man thing and tries to flip the allegation back on Victoria and her insecurities, but Austen is clearly using her as a placeholder for Chelsea, so I dunno man.  ¯\_(ツ)_/¯

The real MVP of the night was Southern Charm “friend” Danni, who was a flippin’ CHAMP when is came to telling Ashley to back down. She also had the best line of the night when she told her, “stop flipping your f***ing hair like that!” Which was so right on! Whose hair do you think you have, Ashley Jacobs? Khloe Kardashian’s ombré?

Anyway, I am exhausted from this whole ordeal. But this episode was certainly worth the 75 minutes.

Tell us if you’re on Team Ashley or Team Kathryn in the comments!