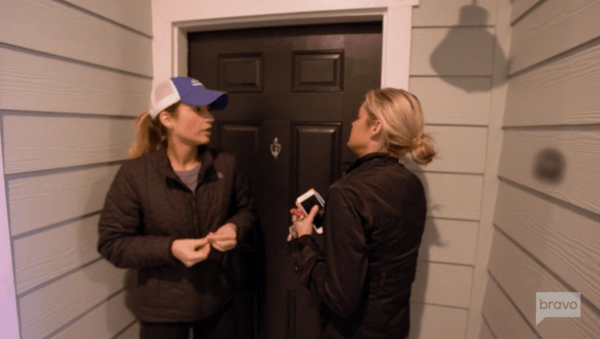 Is Danni the best person on this show? She seems to be the only person who has morals, conviction, and a kind heart in all of Charleston. She stood up for Kathryn Dennis when Ashley Jacobs had her *ahem* episode, she dragged Thomas Ravenel off to the side to demand that he get his girlfriend under control, and in this episode, she was such a wonderful friend to Kathryn, who has admitted that she suffers from anxiety and depression. Danni is the MVP of the season.

Take for instance, this moment when Naomie Olindo and Danni drive over to Kathryn’s apartment to check on her. Kathryn hasn’t been answering her phone for a week; no text messages, no phone calls, nothing. Because of Kathryn’s history of drug use, the women are scared. A week of silence is too long in their minds. Naomie asks Danni what they should do if Kathryn doesn’t answer the door. Should they try and break-in?

“No, we’re her friends.” Danni responds with no hesitation. She is the ultimate mama bird in a flock of Peter Pans and Wendys. And while that doesn’t always make for excellent realty television, it is a welcomed relief from the feckless way that Shep Rose or say, Craig Conover (sorry, Craig) go about their lives. Which I guess while we’re here, let’s get into Craig and his pillows.

In this episode we have learned A LOT about Craig. 1) Craig is a flu shot truther. 2) Craig doesn’t know when people are pacifying him 3) Craig needs to keep his sewing to a hobby.

These pillows? They’re bad. And I feel like we’ve seen multiple people try to politely tell Craig that his clip-art designs are no good. Why not just work with the design team that Patricia Altschul already has for her caftan line? It’s not like the Kardashian girls are sewing mock-ups of the clothes for their clothing lines.

After two months of waiting for Craig to show her his designs, Pat summons Craig to her mansion. Craig shows up hours later, with a bouquet of broken flowers (not nice ones, either) and is still trying to pawn off these horrible clip-art designs. Pat has to politely turn Craig down. She tells Craig that not only are these designs bad, but he has run out of time to fix them. To her face, Craig takes the rejection with grace, but once he’s outside he exclaims that “this is bullshi*t.” I dunno, Craig. Why did Pat have to explain to you (a sort-of, LAWYER) that you can’t license a design that you found off the internet?? It seems like if you’re really serious about this pillow thing, then you might need to go to design school. Because you know NOTHING about being a seamster.

Sidenote: Craig’s friend Warren has had a make-over, no? 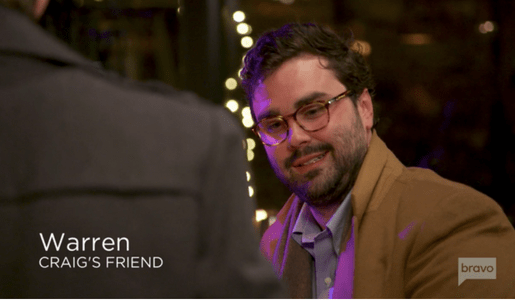 He is looking particularly snack-y (snack-ish?) and that is my new truth. Amen.

Speaking of snacking, Whitney Sulder-Smith and Shep meet up with Cameran Eubanks for a little taste-test of her breastmilk. Seriously. Whitney naturally has to do *the most* and spits out the shot of breastmilk that Cam gives him. While Shep has a more tempered reaction and tells her that the milk isn’t so horrible.

“Do you think that Craig has been laid since Naomie?” Cam asks.

“Do you think he had been laid before he got with Naomie?”

“He lacks the aptitude or something,” Shep agrees. See, this kind of stuff is just rude and makes me like Cam and Shep less.

Whitney asks the incredibly rude question, if Cam is going to need laser vaginal rejuvenation surgery and Cam shuts it down saying that she took a mirror to it the other day and she has gone back to her pre-Palmer shape.

There have been so many rumors this season about whether or not Thomas was fired from the show and if he were to be, what they would do with all of the footage that they have of him for the rest of the season. Which came to mind, particularly in this episode, when we see Thomas with his kids. I get no comfort from seeing Thomas act as a good father towards Kensie and Saint. I can’t cheer for Kathryn and Thomas to get back together and I certainly don’t empathize with him in regards to his relationship with Ashley.

Thomas takes Ashley out to dinner and gets her a promise bracelet. Which we can see is obviously not the piece of jewelry that she wanted. He tells her that she is too clingy and needs a life of her own (it is RICH to be getting life lessons from Thomas, but here we are) and she tells him that as soon as her license comes through in South Carolina she’ll start working again (sure, Jan).

In some better relationship news, Austen Kroll is officially done with Victoria (thank goodness) and if the previews for the next episode are not deceiving me, Chelsea Meissner asks Austen to go with her to Patricia’s ball. I thought I was over Austen and Chelsea, but apparently I will go down with this ship. What a world.

Do you think Craig should give up on sewing? Let us know in the comments!

Be the first to leave Comments for Southern Charm Recap: Gone Girl