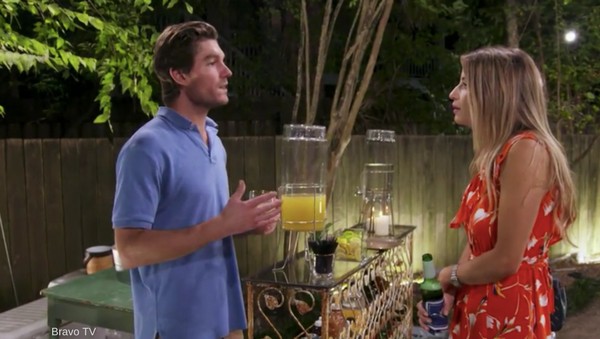 Welcome back to the second episode Southern Charm. The theme of the season has actually really surprised me; it seems like the ladies are determined to destroy the good ol’ boy system (misandry!!!). And I want to let them. But what about that old snake in the grass, Ashley? Let’s just say that she and Thomas Ravenel had a great time at Shep Rose‘s party.

The episode starts with Ashley perhaps showing her true intentions a little too clearly when she tells Thomas that if he wants a new nanny he could just marry her and she can become their caretaker.  So she moved her from California to be with him, she doesn’t have a job, and she’s pushing him to get married, while also badmouthing the mother of his children?

Then a very pregnant Cameran Eubanks  shows up ready to sit and ready to eat (she’s like 9 months pregnant). Ashley, who is really putting on a show, asks Cam if she’s like “4 or 5 months” and we can see that Thomas has certainly gotten himself a politician there.

Cameran ask Craig Conover if he brought a date to the party and he fumbles around searching for the right answer.   Basically, Craig doesn’t want to bring a date if there is a chance that Naomie will take him back, but more on that later.

The “Break-Up Bunch”; Kathryn Calhoun Dennis, Naomie Olindo, Chelsea Meissner, are meanwhile, still riding over to the party. And Naomie is lit like a cannon when they start talking about J.D. Madison. She tells the rest of the women that J.D. took all of Liz’s money, cheated on her, and lied to her for years, which is the real reason why they are getting divorced. But the “good old boy” system means that the men stick together and J.D. can slither his way through acting like he was a saint who was wronged by his fickle wife.

Craig and Shep are still bickering over the dinner that they are cooking and again, they are stressing me out with what really looks like raw meat that they are trying to serve!

The Single Squad (that’s what I’m calling them) finally make it to Shep’s party and things are painfully, painfully awkward when all of the ex-couples: Naomie and Craig, Thomas and Kathryn, Chelsea and Austen Kroll, see each other for the first time and realize that they are going to have to spend the next 2 hours making small talk with each other.

Thomas who is just reveling in the opportunity to make Kathryn jealous, stops Kathryn and makes an introduction between Kathryn and Ashley. Thomas is a petty, small man, and would love for the two to fight for him. He spends most of the night trying to get Kathryn’s attention and trying to goad her into a catfight.

Everyone seems to be talking around their issues. Chelsea and Austen talk about Thomas’ new girlfriend without going into what went wrong with their relationship, Naomie talks to Whitney Sulder-Smith about how awkward it was to run into Craig.

Then J.D. walks in as if the party has finally arrived. I’ve been trying to think of who J.D. reminds me of and I think I figured it out….

Little does J.D. know that the women HATE him. The women leave the room when J.D. walks in and they all talk about how awkward things are. The vibe is very emotional high school kegger.

Everyone goes to sit down at the table and Craig remarks that it was amazing that Shep could bring everyone together to celebrate his birthday. 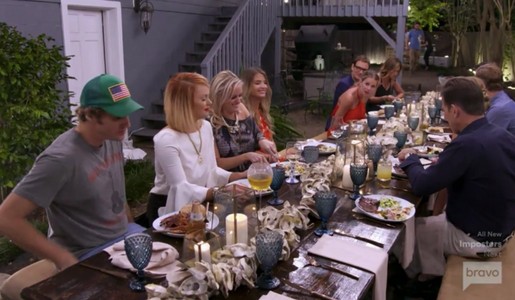 Thomas and Kathryn take a moment to check in with each other. He compliments her new hair color, tells her a dumb blonde joke, and then break the news that he’s hired a new nanny without her permission. Kathryn looks shocked and hurt that he made this decision without her input. She tells him that she wishes they would have talked before he hired someone new and then Thomas tells us that if Kathryn had been this composed before, that they would still be together. I swear, if these two reconcile! Thomas asks Kathryn for a hug, and like the eagle who sees another bird going for her prey, Ashley swoops in to mark her territory.

Ashley compliments Kathryn, her children, and tells her that she has nothing but respect for her. Kathryn does not want to deal with Ashley and says that she didn’t even know that Thomas had a girlfriend. Things get awkward quickly and Kathryn makes a quick exit.

At dinner, Shep makes a toast congratulating Cameran on her child and says that he “wishes all of his friends could be in a relationship that makes as much sense as Cameran’s does.”  Way to address the elephant in the room, Shep! 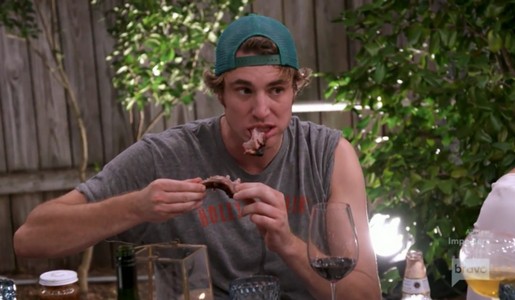 They all dig in and apparently the food is both delicious and safe.

J.D. keeps making barbed remarks about Liz and it is winding Naomie up. He gives Shep a blanket for his birthday and jokingly writes in his card that the blanket is, “if I ever need to crash on your couch.”

Cameran, Shep, and Craig go inside Shep’s house to clean the dishes and talk about Naomie and Craig’s relationship. Little did they know that Ashley and Thomas had the urge to be disgusting and they go into the bathroom to have sex. This girl is really going for her 15 minutes.

Back at the table, J.D. is trying to smooth over the story of his break-up with Liz and Naomie has had enough. She challenges J.D.’s entire story and tells him that he needs to “be a better husband.” She tells J.D. that she goes to his house everyday to pick Liz up off the floor. She charges that J.D. goes out every night and is sleeping with 20-year-olds. Chelsea calls him a con-artist and it becomes very clear to J.D. that this is going to be an ambush. Now it’s the men vs. the women. Whitney, J.D., and Austen are starring at each other like they’ve walked into a den of crazies and J.D. decides that he needs to go.

Naomie cannot let this go, she goes off to the side and Craig goes over to comfort her and tells her that he have her back. Naomie starts to cry and Craig is talking too much. The two hug and Naomie decides to call it a night.

Over at Rappahannock, Ashley and Thomas are having dinner. All Thomas wants to do is get Ashley drunk and take advantage of her. Ashley says that she wants to turn Thomas on, but “just don’t ask me to dye my hair red!” Ew, Ashley no.

Thomas tells us that “when there is estrogen involved, they want to win for the sake of winning.”  I hate that I have to repeat this man’s words. Ashley asks if Thomas wishes that it would have worked out between him and Katherine and Thomas says that if Kathryn was sweet and nice he’d still be with her. The thing is, I think that Thomas really likes to be with crazy women. He likes to sit back and let “b**ches be crazy,” while he gets to feel superior for being the calm level-headed one and he is absolutely a drama king. So while Ashley might be cunning, unless she is going to throw a bottle at his head and bounce off the walls, I don’t think they will go the distance.

Tell us what you think of Thomas’ new girlfriend in the comments!

Be the first to leave Comments for Southern Charm Recap: The Break-Up Bunch Part 2